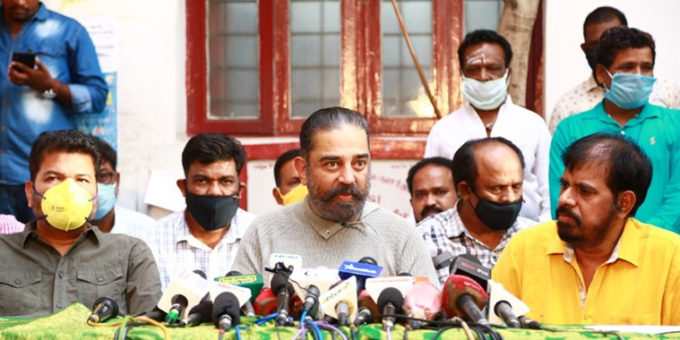 
Kamal Haasan will be seen next in Indian 2. (Photo: Kaushik LM/Twitter)

Kamal Haasan and Shankar on Thursday handed over Rs 4 crore as compensation to those who were affected by the freak accident on the sets of Indian 2 in February earlier this year.

The kin of Krishna (Assistant Director), Chandran (Art Assistant) and Madhu (Production assistant), who died in the mishap, received cheques of Rs 1 crore each. The lightman who suffered serious injuries was given Rs 80 lakh as compensation. Rs 10 lakh was earmarked to help those who sustained minor injuries in the accident.

The compensation pool was created by the contributions made by Kamal Haasan, Shankar and Lyca Productions.

“The director and I were also present at the spot. It could have happened to anyone of us,” Kamal told the media. “We have a bigger responsibility of preventing such accidents in future. A week after the accident, we all met to discuss what we can do about this. But, due to the COVID, we were unable to meet again.”

On February 19, a giant crane carrying heavy lighting equipment came down crashing while the crew was shooting an important action scene on the sets at EVP Film City in Poonamallee, Chennai.

After the incident, Kamal noted that he ”miraculously escaped from joining the list of fatalities” as he was just a few meters away from the mishap spot. He had also demanded that producers Lyca Productions carry out safety audits of the shooting spot and provide insurance for every member of the crew.

Kamal Haasan also hinted at resuming the shoot of Indian 2 soon. He remarked that prolonged delay would only add to the woes of daily wage workers. He added that required precautions need to be taken to ensure a safe workplace.

“In foreign countries, big thinkers have researched and recommended ways we can safely work on film sets during this COVID pandemic. I think we should also implement those precautions here,” Kamal noted.

Indian 2 is a sequel to Shankar’s 1996 vigilante drama Indian. It also stars Kajal Aggarwal, Rakul Preet Singh and Siddharth among others.

GC Murmu, Who Quit As J&K Lt Governor, Is Comptroller And Auditor General