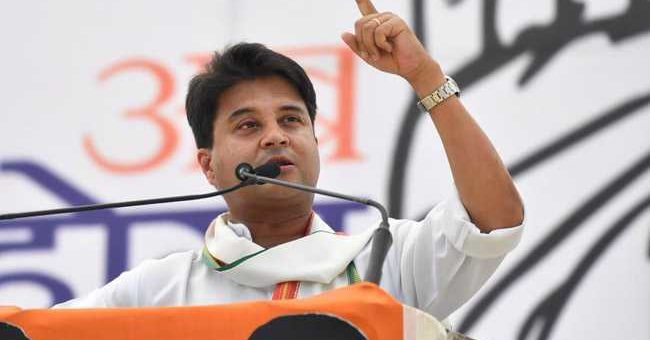 “The current government is unable to arrest the economic slowdown,” Jyotiraditya Scindia said.

Senior Congress leader and former MP Jyotiraditya Scindia on Sunday launched an attack on the BJP, stating that the party’s ideology is to carry on with its agenda even as the country reels under economic slowdown.

Speaking to reporters in Indore on Sunday, Mr Scindia said: “The BJP’s ideology is to keep the country in a state of economic slowdown, and at the same time keep working on its agenda.”

Mr Scindia also compared the UPA government’s economic record with that of the present government and said that the average GDP growth rate was 6.7 per cent during ten years of UPA rule.

“Under 10 years of the UPA government, there was an average of 6.7 per cent of GDP growth rate. In the past six quarters, however, we are witnessing that every record is being broken in terms of economic decline,” he said.

“The current government is unable to arrest the economic slowdown. On one side, there is Inspector Raj. People are being thrown into jail. On the other hand, we are unable to control the economic situation. It is a cause of worry,” Mr Scindia added.

Mr Scindia’s remarks come at a time when the opposition continues to attack the government over the prevailing economic slowdown in the country.

In a bid to arrest the current slowdown, Finance Minister Nirmala Sitharaman on Saturday announced the government’s third set of measures to revive the economy with a renewed focus on exports and realty sector.