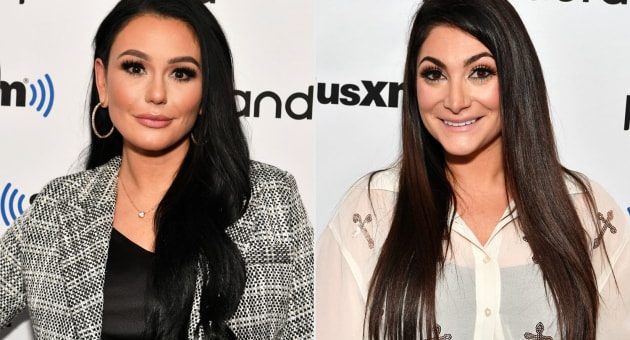 Regardless of how you feel about the show’s most recent seasons, there’s no denying that Jersey Shore isn’t what it used to be.


The series has gone from a drama-fueled sh-tshow to a family-friendly reality sitcom.


Talk about clubbing and hooking up has been replaced by conversations about breast pumps and pre-schools.


We’re not saying this is a bad thing, mind you — just that the show is undeniably different.


And the change in tone has brought with it some changes in personnel.


Sammi Giancola took a pass on the new version of Shore, a decision that seems to have been prompted by her tumultuous relationship with Ronnie Magro.


Snooki quit the show back in 2019, but she’ll soon be making her triumphant return in the Poconos season that premiered last Thursday.


Angelina Pivarnick returned to the show, and despite barely taking part in the Shore’s original run, she’s now become something of a fan favorite.


These days there are rumors that Ronnie will be fired by Shore execs, but that hasn’t happened yet, and he has not been edited out of the Poconos season, as was rumored before the premiere.


Given all the changes that have taken place during the run of Jersey Shore Family Vaction (the official title of the new iteration that’s used by no one except MTV execs, and only then for contractual reasons), perhaps it’s not surprising that other cast members have also considered jumping ship.


In fact, Jenni “JWoww” Farley and Deena Nicole Cortese revealed in a recent interview that there was a time when they couldn’t imagine themselves coming back for more Shore.


Cortese says the controversy surrounding the infamous bridesmaids speech at Angelina’s wedding, nearly led her to follow Snooki out the door.


“After the wedding situation, I definitely was like, I kind of need a break myself. And then also it’s just very hard for me to leave my kids,” she told In Touch.


“But luckily the production company and MTV has been so amazing with like working with us,” Deena continued.


“I think what I just love so much about the show, we truly are a family and they were able to work with us to make us comfortable. Now that we’re moms and we don’t want to leave our kids, it’s hard,” Cortese went on.


“But they made it work and I absolutely love it. I wouldn’t trade anything for the world for sure.”


After Snooki left, JWoww threatened to quit the show too, but she was convinced to remain on board by the compassion and flexibility that the production staff showed during the Covid-19 pandemic.


“What it came down to with me is now that my daughter’s in school, you have to pick and choose your battles. School is not one of them,” she explained.


“It’s a non-negotiable. So it actually worked out perfect.


“Not to say that [COVID-19] was a good thing, because it was absolutely awful, but it allowed my daughter to be virtual,” Farley continued.


At that point, Jenni divulged the real reason that she only traveled to Vegas for the final episodes of last season.


“I would just need you guys to do it around, you know, my child’s schedule and schooling,” she told In Touch.


Jenni concluded the interview by discussing how overjoyed she was to have her BFF Snooki re-join the rest of the Shore family on camera.


“We didn’t skip a beat though, because off camera, we truly are a family and friends. Off camera, we would still speak every single day,” Jenni said.


“Even though we missed her on camera, we still talked to her during the whole show and everything. So it’s, it was like she was there, but she wasn’t.”


So there you have it — it sounds like our favorite fist-pumping enthusiasts might be pranking each other and spewing new catchphrases well into the 2030s!

Photos: Alia Bhatt heads out for a meeting at Sanjay Leela Bhansali’s office