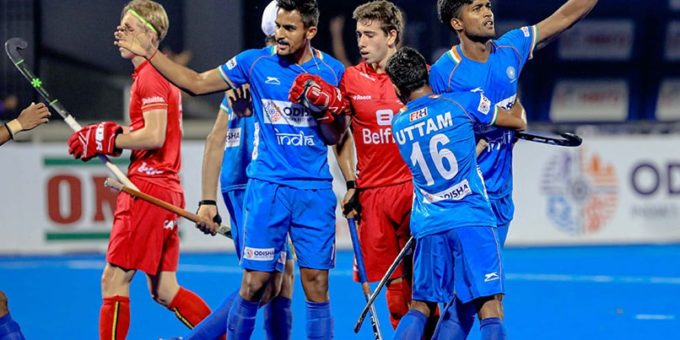 Defending champions India beat European giants Belgium by a solitary goal to progress to the semifinals and keep alive their title hopes in the FIH Junior Men’s Hockey World Cup at the Kalinga Stadium here on Wednesday. India, who beat Belgium 2-1 in the final en route to their title triumph in the last edition in Lucknow in 2016, continued their domination over the European side in junior hockey. Shardananad Tiwari’s penalty corner conversion in the 21th minute was enough for India to seal their place in the last four.

The match was a classic example of defensive class from both the sides but the Indians did just enough to edge past their opponents.

India will take on last edition’s bronze medallist Germany in the semifinals on Friday. Six-time champions Germany beat Spain 3-1 in the shoot-out after both the teams were locked 2-2 in regulation time.

The Belgians started aggressively and created pressure on the Indian defence in the first few minutes.

But the Indian backline produced good men-to-men marking and stayed calm under pressure to deny Belgium.

In the 13th minute Belgium had the first shy at the goal but Indian custodian Prasanth Chauhan was up to the task to deny Thibeau Stockbroekx from close range.

India’s first scoring chance came just seconds from the first quarter through a creative Uttam Singh, but his effort was kept at bay by Belgium goalkeeper Boris Feldheim.

India kept growing in confidence as the match progressed and six minutes into the second quarter, secured their first penalty corner, which was converted by Tiwari.

Tiwari was brilliantly set by vice-captain Sanjay Kumar’s dummy and the dragflicker made no mistake in putting the ball into the net.

Two minutes later, Manjeet hit the side netting with a reverse hit.

Belgium got a penalty corner in the 26th minute but Jeff de Winter’s flick went wide as India went into half time leading by a slender 1-0 margin.

The Belgians came out attacking in the third quarter but failed to break the resolute and determined Indian defence.

There were no clear cut chances for both the teams in the third quarter, but the Indians were guilty of holding on to the ball, resulting in less open chances.

The Belgians went all out in the fourth and final quarter and controlled the proceedings but the Indian defence did enough to thwart their opponents.

In the 50th minute, India’s second goalkeeper Pawan made a brilliant diving save to his right to keep Roman Duvekot’s attempt away from the goal.

Trailing, Belgium continued to press hard and secured a penalty corner in the 52nd minute, which was saved by the Indian defence.

Three minutes from the final hooter, Belgium withdrew their goalkeeper for an extra player and also secured a penalty corner just two minutes from whistle, but once again, Pawan made a fine save to deny de Winter.

‘One year, hundreds of recycled plastic bottles, over 800 hours’: What went into making Maria Sharapova’s outfit

Justin Bieber’s Response on Having Kids with Hailey Baldwin Earns Praises, Here’s Why
2020-03-04

Hrithik Roshan and Tiger Shroff will have a dance off in YRF’s next – Student Of The Year 2 actor CONFIRMS! | Bollywood News
2019-05-01