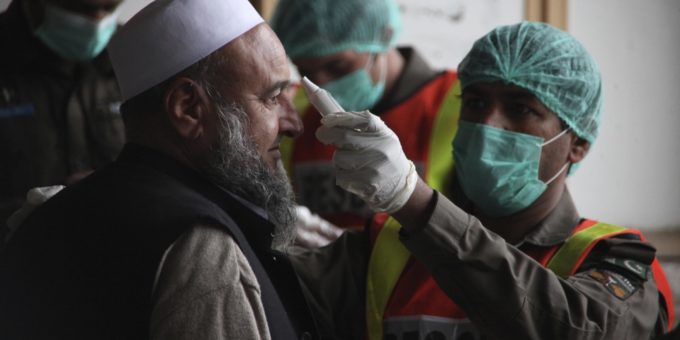 Prayers, Jummah and funerals: Advice for Muslims and mosques to stop spread of Coronovirus

Mosque organisations have given advice to mosques and madrasas as on what to do in the event of the virus spreading further.

The Muslims Council of Britain said that mosques should be prepared to announce suspension of Jum’ah and daily fardh salah in congregation if conditions should change.

The MCB said in their advice, ‘Current guidance does not support closing schools, but this too is highly likely and remains under constant review. Madrasas may wish to review the above guidance and follow it accordingly.’

Mosques should also consider ‘shortening activities – reduce khutbah, salah and any reminders to shortest time possible. Suspend praying of sunnah and nawafil prayers in the mosque, as well as external events.’

Please be aware that whilst children are not thought to be severely affected by COVID-19, they can pass it onto elderly and vulnerable people.

The advice adds, ‘Friday Jum’ah prayers constitute a large gathering and the recommendation to temporarily suspend them is very likely in the next few days.’

The British Board of Scholars and Imams (BBSI) said in their advice, ‘It is highly likely that pandemic will stretch into Ramadan.

Given the likely suspension of public gatherings, mosques should be prepared to suspend Tarawih prayers and possibly other congregational prayers.’

Among them was that wudu (ablution) areas have sufficient soap, hand sanitiser and paper towels to ensure visitors are able to comply with hygiene advice.

Pupils, students, staff and visitors should wash their hands: before leaving home; on arrival at madrasa; after using the toilet; after breaks and sporting activities; before food preparation; before eating any food and before leaving madrasa.

The British Board of Scholars and Imams (BBSI) gave this advice for mosques.

Strongly discourage congregants from attending any mosque activities even if they are only experiencing mild symptoms. The symptoms include respiratory symptoms, fever, cough, shortness of breath and breathing difficulties. In this instance, they are excused from the congregational prayers (including Jumua)

It is religiously obligatory (wajib) for you to keep away and self-isolate if you have been diagnosed Coronavirus in order to prevent the virus from spreading. Preventing harm, especially to others, takes precedence over attaining benefit

If congregants experience symptoms, keep a 2-metre distance from others. Maintain a specific isolation room for such congregants, and call NHS 111

Advise congregants to make wudhu at home and bring their own prayer mats. If wudhu has to be done in the mosque, remove towels and instead provide disposable paper
towels

Advice should be in multiple languages if necessary. Some may be concerned that the alcohol in these santisiers is considered religiously impure (najis) by some scholars; if so, a simple wash of water after use of hand sanitiser, which takes place during wudhu anyway, will suffice to remove the najasa.

Remind the congregation to avoid physical contact, maintain general good hygiene and take care of their health more generally, as it is an amana (sacred trust) from Allah.

The National Burial Council has published the following guidance when a Muslim dies due to Coronavirus:

At the time of death, family members should keep contact to a minimum. They should wear protective clothing.

The dead body should first be placed in an appropriately robust body bag with a secondary protective cover, disinfecting any trolleys that the body is carried in.

Funeral workers must wear protective clothing, avoid direct contact with any body fluids from the dead body, and must not touch their eyes, mouth or nose.

After completing Ghusl, place the body in a robust and leakproof body bag, and then wrap the Kafan. The outside of the coffin should also be cleaned.

When paying last respects, the Kafan can be opened to show the face, but the body bag must stay on.

The Janazah can take place as normal.

All those who handle the coffin at any point during the Janazah or burial must wear protective clothing.

Sadqa cannot be a substitute for animal sacrifice: Mufti Muneeb
2020-07-02