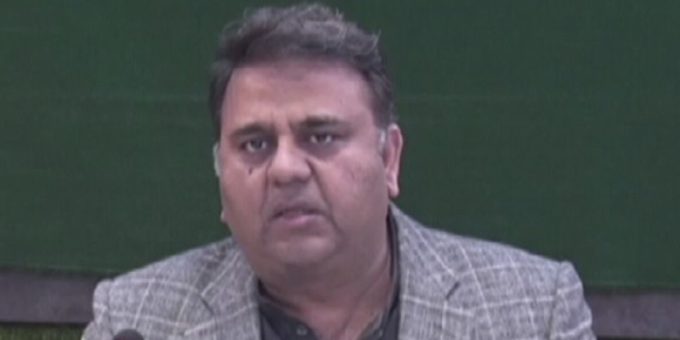 Minister for Information and Broadcasting Fawad Chaudhry on Tuesday said that the Jamiat Ulema-e-Islam scoring big in the first phase of local body elections in Khyber Pakhtunkhwa is “unfortunate”.

This will spell the country’s “downfall” as a party “that is against women’s rights and is a supporter of extremist policies when it comes to religion” has won the local body polls, Chaudhry said, while addressing a post-cabinet meeting press conference.

The information minister said it was the country’s “misfortune that a party that should have been dismantled”, won in the local body polls because of “our mistakes”.

“Due to administrative problems, we suffered some set back in the local body elections in Khyber Pakhtunkhwa,” Chaudhry maintained, adding the PTI is “the only national (level) party in the country”.

He said parties like JUI could not be considered a substitute for the PTI, whereas the PML-N and the PPP “had no place” in national politics.

“Imran Khan is the leader of the federation. It is important for the leadership and workers of the PTI to put aside their differences and strengthen Imran Khan,” Chaudhry said.

“Without Imran Khan, Pakistan’s politics would disintegrate,” he added.

The Opposition parties, particularly the JUI, have taken an unassailable lead in Khyber Pakhtunkwa’s ongoing local body elections, leaving PTI behind, according to unofficial results.

The ruling party could not grab a single mayor seat, winning in only one tehsil in Peshawar out of six tehsils.

The results, however, for the election of mayor in Peshawar have been stopped by the Election Commission of Pakistan on account of postponement of polling on some polling stations due to disruption in law and order on election day there.

In response to a question about PML-N Vice-President Maryam Nawaz, the information minister said that she “does not have much of a political standing”.

Speaking about former president Asif Ali Zardari’s recent speech in Nawabshah where he slammed the government’s policies, Chaudhry said: “If they even see the potential of a deal, all of them rush with their polish.”

On the economic front, he said indicators show a positive trajectory and economic stability due to the “prudent policies” of the government, Radio Pakistan reported.

The minister said that opportunities for wealth creation are on the rise in the country, with the textile, information technology, agriculture, and other sectors performing well.

He said direct taxes have seen a 31% surge, adding that all the crops have witnessed record production resulting in additional income of Rs1,100 billion to farmers.

He said consumption of electricity and diesel grew by 13% and 26% respectively.

Talking about the increase in current expenditure, the minister said it was because of the expenses incurred on procurement of COVID-19 vaccines and payment of Rs134 billion to Independent Power Producers.

Who Is Gabriel Boric, Chile's Next President? – The New York Times

PM Narendra Modi Not In Good Mood Over Border Row With China: US President Donald Trump
2020-05-28