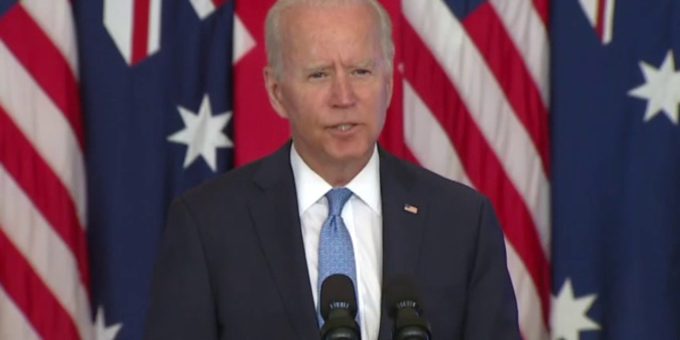 First was the deadly, botched exit from Afghanistan and ensuing humanitarian disaster. Then came the Pentagon’s belated disclosure that its Aug. 29 drone strike in Kabul killing 10 civilians, seven of them children, which the Defense Department mischaracterized for weeks, was, in fact, a mistake, or as a Pentagon spokesman put it, a “horrible tragedy of war.”

While candidate Biden vowed to restore the vital foreign alliances that Donald Trump had so badly damaged, President Biden has managed in only eight months to raise widespread doubts at home and abroad both about America’s competence and the reliability of its security guarantees.

Calling the Biden administration’s deal to sell Australia nuclear-powered submarines a “stab in the back,” France recalled its ambassadors from Washington and Canberra on Friday.

The U.S. sale prompted Australia to cancel a prior $66 billion agreement to buy French diesel-powered submarines. In the long history of French-American relations, France has never before withdrawn an ambassador from Washington for consultations.

Once again, French furor was as much over the sale itself as the secrecy in which Washington conducted its negotiations. Having been approached by Australia months ago about the purchase, team Biden went to extraordinary steps to hide its negotiations fromParis. The French contract with Australia was among the largest defense contracts in its history, and French President Emmanuel Macron faces elections in seven months.

“For any who still doubted it,” said Le Monde, France’s leading daily, “the Biden administration is no different from the Trump administration on this point: The United States comes first, whether it’s in the strategic, economic, financial or health fields, ‘America First’ is the guiding line of the White House’s foreign policy.”

Biden administration officials have downplayed France’s fury as a “disagreement between good friends” while defending the sale as essential to bolstering Australia’s and the West’s ability to counter China’s growing military assertiveness in the Indo-Pacific. Several officials noted that the French submarines would have been obsolete by the time they hit the water, and that Australia had assured the administration it would handle French pique over cancellation of its sale.

Still, France sees the U.S. decision and the way in which it was done as “brutal,” as French foreign minister Jean-Yves Le Drian said, as well as a pivot away from both France and the Atlantic alliance in favor of increased focus on countering China’s rise.

French anger over the deal was also exacerbated by Britain’s partnership in the sale, given the historic rivalry between London and Paris and long-standing French suspicions about an ostensible Anglophone cabal to marginalize Paris given its insistence on an independent stance within the North Atlantic Treaty Organization and Macron’s desire to chart a middle course between Beijing and Washington.

France is not the only country to increasingly doubt America’s fidelity to its allies or security guarantees.

France is not the only country to increasingly doubt America’s fidelity to its allies or security guarantees. Concerns about Washington’s reliability were widespread last week at a conference in Kiev, the capital of Ukraine, whose territory has been partially occupied and annexed by Russia since 2014 when Russian-backed forces invaded and occupied Crimea.

Moscow has amassed over100,000 troops on its border and taken other provocative steps; Russian President Vladimir Putin has also claimed Ukraine as an integral part of Russia, denying Ukrainian sovereignty. Ukraine increasingly fears being surrounded by Russia and its surrogates, by Russia itself, by Russian forces in Belarus in the north, and in the south by Russians in occupied Crimea and the separatist region of Transnistria in Moldova.

So far, over 13,200 Ukrainians have died and two million people have been displaced in the low-intensity war. Although Ukrainian President Volodymyr Zelensky became only the second European leader to have an official visit in Washington in early September, a visit he had been seeking since his election in 2019, he and other senior officials were quietly disappointed with the outcome.

While Washington agreed to a $60 million increase in military aid, including the sale of Javelin anti-armor missiles and other weapons, bringing annual military aid to Ukraine to over $400 million, several Ukrainian officials and American experts said last week that Zelensky did not get much of what he was seeking.

While Alexander Vershbow, a former U.S. ambassador to Russia, called the aid “good in terms of the strategic defense framework,” the dire security situation in Ukraine,” he said in an interview, called for “a larger U.S. commitment.”

In remarks at the opening of the 17-year-old Yalta European Strategy (YES) meeting in Kiev, Zelensky obliquely expressed his own disappointment.

While diplomats hailed his Washington visit as a success, Zelensky told the gathering of 100 European officials, diplomats and foreign policy experts that the West’s unwillingness, despite Russia’s aggression, to give his country either a clear path to NATO membership or inclusion in the European Union left him feeling isolated. Ukrainians see both NATO and EU membership as vital to its integration in Europe and the West and deterrence to further Russian aggression.

“Yalta [Crimea’s capital] remains occupied and there is no political will to change that,” Zelensky complained. While Biden had assured him that the U.S. would support Ukraine in its war with Russia, “actions speak louder than words,” he said.

Ukraine has been particularly disappointed by Biden’s acquiescence to Germany’s requests that Russia be permitted to complete Nord Stream 2, an $11 billion natural gas pipeline that bypasses Ukraine. The pipeline, its critics say, not only denies Ukraine vital gas transit revenues, but also exposes it to Russian blackmail, or energy shutoffs.

The Trump administration tried blocking the pipeline, to German furor, by among other things, sanctioning those participating in its construction. Administration officials say the pipeline was virtually finished when Biden took office and that maintaining the sanctions would serve no purpose other than alienating Berlin, a crucial NATO ally.

But several diplomats challenged Biden’s pipeline shift at the meeting, saying that Russia had stopped working on parts of the pipeline after Trump’s defeat, waiting to see how Biden would react. “Whether it’s to the Taliban or Russia,” John Herbst, a former ambassador to Ukraine and veteran diplomat, told me in an interview, “we’ve seen a pattern from this administration of premature concessions and caving in before you have to do so.”

“This is not about gas or gas transit fees,” said Kurt Volker, the former U.S. special envoy to Ukrainian peace talks, in an interview. “It’s about the security of Western Europe.”

Also speaking at YES, John Bolton, a former national security adviser who wrote a scathing book about his tenure under President Trump, warned that both Russia and China would conclude from America’s chaotic exit from Afghanistan and its failure to support staunchly countries like Ukraine, that despite the country’s endemic corruption, “we don’t have the will to defend our allies.”

When Trump was president, said Carl Bildt, a former Swedish prime minister, “Europe was unhappy with its consultations. Now it’s worse. There are no consultations.”

Because of the Biden administration’s chaotic Afghan withdrawal and botched implementation of other decisions, he added in an interview, “Biden has undercut his central campaign theme of competence.” In a recent tweet, Bildt called Biden’s handling of the submarine sale to Australia “stunningly inept.”

While few Europeans want Donald Trump to return to the White House, said one veteran European diplomat, “the fact that Biden is even being compared with him speaks volumes about Biden’s missteps.”