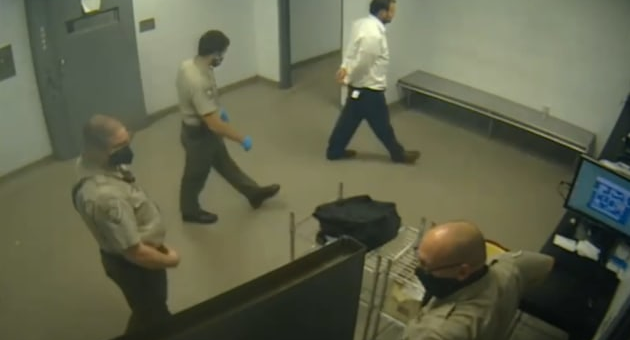 
Now that Josh Duggar has been convicted of receiving and possessing child sexual abuse material, the next phase is sentencing.


Josh was convicted of two major federal charges, each of which carrying the potential for decades behind bars.


How long do legal experts say that Josh will actually end up serving?


Josh was convicted on Thursday, December 9.


His sentencing will not take place for at least four months — likely some time in the spring of 2022.


Months behind bars, likely spending the entire time in protective custody, is just a taste of what is to come.


Though Josh was convicted on two charges, the world needs to brace themselves, because he will only be sentenced for one.


Josh will be sentenced for receiving CSAM, but not for possessing it despite the conviction.


The reason is that possession was a lesser, included charge, considered a less significant part of the same crime.


When it comes to Josh’s sentencing, we know that it won’t be a short one — and he certainly won’t be released with time served.


We can rest easy in this knowledge because Josh’s conviction comes with a mandatory minimum sentence of 5 years in federal prison.


The maximum potential sentence, meanwhile, is a full 20 years alongside a hefty $250,000 fine.


A maximum sentence is not guaranteed — and we shouldn’t get our hopes up, legal experts suggest.


Instead, the actual sentence is likely to fall between the maximum and the minimum sentence, possibly erring on being shorter.


A normal sentence for this crime might be 8-12 years, and it is unclear if special circumstances like Josh’s fame or family will be enough for the judge to extend it.


One might ask why the lesser included charge and conviction matter at all.


We should keep in mind that Josh’s attorneys immediately vowed to appeal the sentence.


If one of their many appeals manages to stick and Josh’s charge for receiving CSAM goes away, the conviction for possession will remain.


In many cases, on the state level, people do not always serve their full sentence.


Convicts are released for good behavior, sent into halfway houses or placed on probation — if that — with years remaining on their sentences.


In many cases, this is good. In some cases, the crime is so egregious that releasing someone into the community causes justifiable fear.


Josh’s conviction is federal, which means that he is likely to seve a larger proportion of his sentence.


A good estimate is around 80%, though that is of course an approximation.


Josh’s past crimes are well known, but as far as his criminal history is concerned, this is his first offense.


At sentencing, the judge may consider that — on paper — Josh has never committed a crime before.


However, the court is not obligated to do so. The sentencing guidelines are what matter most.


Millions were disgusted by the news that Anna was visibly supporting her husband through all of this.


Yes, she was raised in an abusive cult, but that explanation does not excuse her from her obligations to protect her children.


Some have naturally wondered if Anna could face any charges following Josh’s conviction.


That is extremely unlikely, as she has not been accused of any crimes.


Unfortunately, sticking by a sexual predator is not a crime. It’s unlikely that her custody of the children would even be challenged.


Barring some very improbable bombshell discovery that she participated in Josh’s acquisitions (she didn’t), then her story is very sad but not criminal.


There is one other angle to consider in all of this: reports that Josh is willing to take down the rest of his family with him.


He likely knows of numerous other crimes within the cult, things that were covered up — like his own offenses — to protect the church.


It’s not clear if he will spill the beans, or if a promise of Jim Bob’s money during and after his sentence will buy his silence.

Photos: Vicky Kaushal is back to work after his wedding