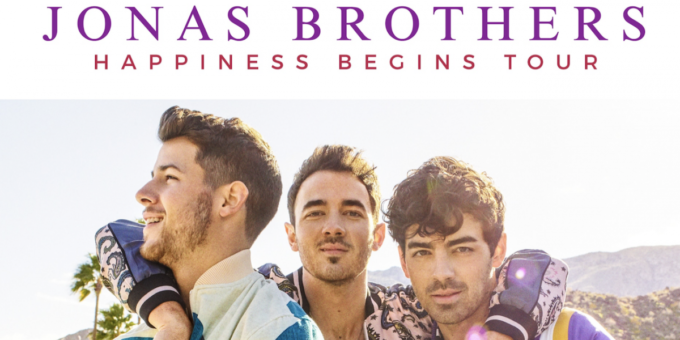 Jonas Brothers were a household name for the children of the 90s and early 2000s. This band of boys consisting of brothers Kevin, Joe and Nick Jonas rose to fame in 2005 after their appearances on Disney Channel. They gave many successful songs and albums together. Jonas Brothers have sold over 17 million albums across the world. They were also nominated for the Best New Artist award in 2008 for the 51st Grammy Awards. However, after a hiatus in 2010 the members Kevin, Joe and Nick Jonas decided to pursue their solo ambitions and the band was split up.

The good news for their fans is that they are back in groove now. On February 28th, they announced a comeback for their fans via social media. On March 1st, 2019 their famous song ‘Sucker’ was released. Jonas Brothers are all set for their comeback tour which is called ‘The Happiness Begins’. It will be their tenth concert tour together. This tour is scheduled to begin in Miami on 7th August, 2019 and end on February 22nd, 2020 in Paris. Their social media pages are all about ‘The Happiness Begins’ tour at the moment.

Jonas Brothers are not only famous for their music but also for their charm through which they had the entire world going mad for them. Two brothers Joe and Nick Jonas are also famous for the people they are married to. While the younger brother Nick Jonas married his ten year senior Priyanka Chopra who is a global star, Joe Jonas married ‘The Game of Thrones’ fame actress Sophie Turner. Both the weddings were highly anticipated. While Nick Jonas and Priyanka Chopra’s wedding was a more traditional and grand affair, Joe Jonas and Sophie Turner amazed everyone with their out of the box Vegas wedding. They later got married in a conventional ceremony in France in the presence of close family and friends.

Vicki Gunvalson: Even I Have No Idea Why I Got Demoted!