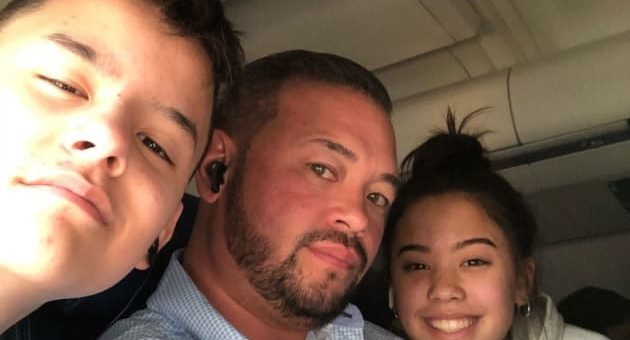 Jon Gosselin has recently shared that fame turned Kate into the monster she is now and accused her of abusing their chidlren.


Now, he and his family are taking a break from it all by enjoying a vacation. It looks like Collin and Hannah are having a great time!


In the photo, you can see Jon between his two teens, Collin and Hannah.


Like the other four sextuplets, these two turned 15 six months ago.


Unlike the other four, they are breathing free air with Jon, enjoying their teenage lives instead of living under their mother’s thumb.


Jon’s girlfriend, Colleen Conrad, was obviously also on the vacation.


She gushes on social media about what a good time she was having in St. Croix.


Collen wrote: “Love being with my family!!”


Unfortunately for everyone but Kate, Collin and Hannah are the only siblings living (and vacationing) with Jon and Colleen.


The other four sextuplets remain in Kate’s icy grip. And the twins are, of course, in college.


Many fans believe that they may have a form of captor bonding (Stockholm Syndrome) common among kids with toxic, controlling parents.


The psychological mechanism makes children, teens, and even adults eager to please the worst parent in hope of gaining approval.


“I believe that her belief system is skewed,” Jon Gosselin said during a recent episode of Doctor Oz. “That’s what I believe.”


“I believe her intentions in the beginning were good intentions,” he astoundingly admitted.


“Bringing kids into the world that she fought to have, these kids,” Jon noted.


He added: “But I think once fame and money got involved, it twisted her belief system.”


“On my end,” Jon emphasized, “I’ve been fighting to get my kids off TV forever.”


“I don’t think coparenting is ever going to exist between us because we are never going to see eye to eye,” he lamented.


“We have completely different parenting styles and she still wants to film, but I’m never going to sign work permits,” Jon affirmed.


He complained: “They already went to court and I won but she went against my legal rights.”


“I agree [that they are my children] but their mother puts roadblocks all the way,” Jon said of his strained relationship with the other six.


“So, at this point, I’ve agreed that as long as Hannah and Collin still talk to their siblings …” he began.


Jon continued: “… And the kids can interact with each other, then that’s fine with me. I’ll go along.”


“And I don’t have no direct contact as of now,” he said of the estranged teens.


Jon recently did a slew of interviews — the absurd Doctor Oz sit-down being just one of them — in which he spoke about his complicated family.


He explained how he’d had to “re-parent” Collin and Hannah because they were so accustomed to Kate’s toxic, harmful behavior.


It is heartwarming to see these two teens in a loving, nurturing home that isn’t interested in exploiting them for profit.


We hope that all of the Gosselin children get a lot of therapy and hopefully write bestselling books exposing their mother — when they’e ready.

7 best-dressed divas from the week gone by