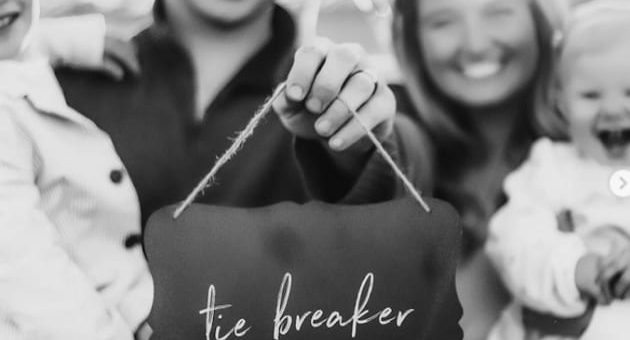 
They have a rather important announcement to make.


The Counting On stars, who are already parents to a two-year old son named Garrett and a one-year old daughter named Addison, took to Instagram on Monday evening and revealed the gender of their next child.


Will these kids be getting a brother or a sister in a few months?


… and now we have the answer!


“We are so excited to announce that our tiebreaker is a GIRL,” wrote the couple as a caption to the photos above and immediately below.


“The boys are outnumbered now! We are already in love with her and cannot wait to meet her!!!” they added.


Late this summer, the proud mother and father took fans aback upon revealing they were expecting once again, so soon after welcoming Addison into the world.


“We are so excited to announce that we have a tie-breaker coming in February,” they shared at the time. “Baby #3 is on the way!”


How did their toddlers feel about the miraculous news?


“We are so excited to see Garrett and Addison’s reaction when they meet the new baby,” Kendra and Joe added.


“Garrett has already been such a loving big brother to Addison and we look forward to Addison’s reaction to a life size baby doll.


“Life is full of surprises and we’re thrilled that it is a sweet baby that surprises us this time!”


“Happy 1st Birthday to our sweet little Addie!!!” they wrote on Instagram in celebration.


“We’re so blessed to have her in our family! Her brother Garrett loves her so much and we couldn’t be more grateful for such a fun and spunky little girl to do life with.”


As viewers likely recall, Kendra and Joseph began their courtship in 2017, with Joseph admitting on Counting On:


“When Kendra said ‘yes,’ it was such a big relief to me just knowing that now I’ve actually entered a new phase of life.”


Later that same year, the couple got engaged … at the wedding reception for Joy-Anna Duggar and Austin Forsyth!


Fast forward to their wedding and first-ever kiss, which must have been quickly followed by their first-ever trip to Pound Town — and here they are now!


About to be parents of THREE!


“I’ve always dreamed of having my own family and it’s really just kind of surreal that it’s actually here,” Joseph said upon revealing child number-one was on the way.


And we’re so very happy that he and Kendra are happy.


We can’t wait to meet their next bundle of joy!

Bollywood actresses who tied the knot with cricketers
2020-08-07

Coronavirus: Kiren Rijiju Feels Sports Events Will Return In Country In Next Couple Of Months
2020-06-08