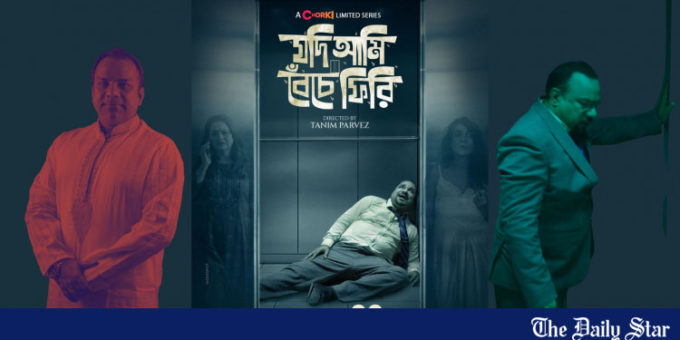 When Chorki announced the release of a new project “Jodi Ami Beche Firi”, starring Misha Sawdagor in the lead, I was rather excited at the prospect of watching the biggest villain of Dhallywood come to life on an OTT platform.

Unfortunately, no amount of nostalgic value attributed to the man could justify how disappointing the three-episode long limited series was for me.

In the series, Misha plays the role of Robiul, a wealthy man who made all of his money through means of corruption and deceptive schemes. Despite having a family with his wife and two children, he also has an ongoing extramarital affair with a much younger woman.

As shown in the trailer, the night he gets stuck inside an elevator is when all the realisations and regrets of all his sins come crashing down, as he panics and fumbles for survival.

From the way the highly stressed atmosphere of the out-of-service elevator was portrayed in the teaser—combined with the way Robiul was delivering his monologue—I was expecting to see the moral conflicts of a person in imminent crisis. Which would eventually shed light on prior events in Robiul’s life, before reaching a resolution.

However, I am now unsure whether the spoiler alert at the beginning of this article is of any use, because what we see in the trailer is exactly what happens in the series, with no further plotline beyond it—let alone character development.

Shahnaz and Sheela, the only two female leads of the series, are so painfully stereotyped that it’s apparent that they are written from a male point of view (POV). Sheela, played by Dilruba Hossain Doyel, is visibly sexualised for a majority of the little screentime she had—fitting the typical image of a mistress with no personality whatsoever.

Shahnaz on the other hand, played by Bijori Barkatullah, is limited to being a money-hungry spouse who, in the end, doesn’t even hold her cheating husband accountable for his actions.

Thinking about Misha Sawdagor’s character, his monologue delivery feels very artificial—a reason why he probably could not embody the role convincingly. The whole sequence of him being stuck in the lift had so much potential to play with, but the entirety of it is spent with him praying for his survival and sending short apology clips to people he did dirty.

While this wasn’t a bad take to begin with, his apologies neither reveal the stories behind them nor build any nuance around them. The biggest disappointment is when he’s hurriedly forced into portraying a changed man at the end of the series, and all his past deeds are made to be justified with the emotional build-up around people watching the videos sent to them.

“Jodi Ami Beche Firi” didn’t have any remarkable suspense to it, and the missed attempts at saving it with comedic bits created even more confusion. The entire duration of the series is just a little over an hour, and seemingly not much effort was given to utilise any of it to tell a remarkable story.