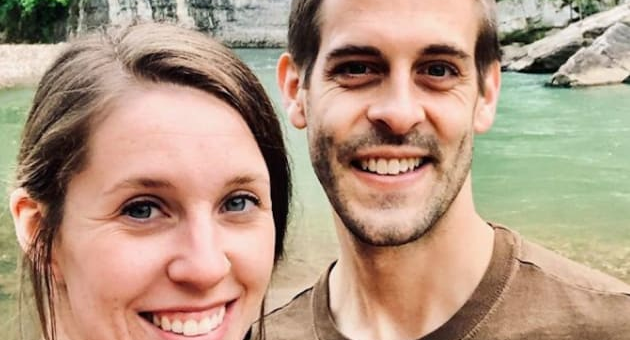 Jill Duggar is struggling a bit at the moment.


For a very understandable reason, of course.


But at least the former reality star has come up with a couple of solutions to make herself feel better.


One involves a dog, the other a donut.


The 30-year old mother of two is quite estranged from her infamous family, but she’s been dragged back into the news surrounding her parents and her siblings for one specific and disturbing reason:


The arrest of her brother, Josh Duggar.


Not merely his arrest, either.


But his arrest on charges that make our stomachs turn just to type out: Possession of pornographic material related to minors as young as 18 months old.


Josh was taken into custody on April 29 for allegedly downloading over 200 photos/videos of kids in compromising, abusive situations.


If convicted on the two charges he faces, Duggar could go to jail for 40 years.


Upon first learning about the arrrest, Jill and her husband, Derick Dillard, issued a short and simple statement.


“We just found out this information yesterday,” it read. “It is very sad.”


Jill hasn’t said very much about the tragic incident since, partly because she has very little to do with her relatives.


She’s been outspoken for a long, long time now about how far apart she’s drifted by parents Jim Bob and Michelle, along with most of her brothers and sisters.


We have no idea the last time Jill spoke to Josh prior to his arrest.


But if we had to guess? We’d peg it at closer to years than moonths.


Late last week, however, Jill appeared to make a passing reference to Josh and the stress he’s been placing on her, just by his continued, awful existence.


“In moments of doubt,” Duggar shared, via the following meme. “Trust your gut. Hug your dog. And eat a donut.”


But sort of totally true and accurate advice as well, wouldn’t you say?


Last month, Jill strongly implied via her Instagram Story that anxiety of Josh was causing her to break out with acne.


“I had some really bad breakouts, maybe from hormones, stress, or possibly hand lotion that was getting on my face when I was sleeping, and my breakout was really bad,” she wrote, without naming names or providing any other details.


“My face was really crazy and we were going to have family pictures made and I was super concerned about it,” she added.


Back in 2015, Josh confessed to molesting a number of young girls when he wa 14 years old… including sisters Jessa and Jill.


Both claimed to have “moved on” from the situation, if that’s even ever possible to do successfully.


Jill, perhaps relatedly, has had a challenging relationship with her family over the years.


Her inability to dictate many aspects of her life resulted in her and Derick distancing themselves from the famous cult, something Jill sort of kept on the down low for awhile — but has more recently opened up about.


“I never expected this to happen or for it to get to this point,” Jill told People Magazine in October 2020.


“But I’m realizing I can’t put a timeline on healing.


“I love my family and they love me.


“I really just have to follow God’s lead and take it one day at a time.”

England vs New Zealand: Dom Bess Added To England Squad Ahead Of 2nd Test Against Kiwis

Foxconn To Shift Some Apple Production To Vietnam To Minimise China Risk: Report
2020-11-26