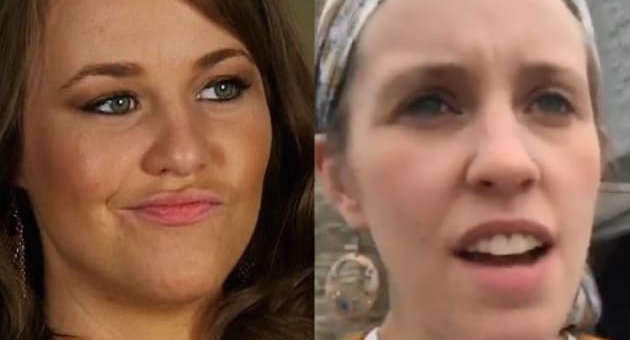 Jill Duggar wears normal clothes, sends her kids to real schools, and uses birth control. All of these have distanced her from her family.


But one of her latest posts, in context, makes it look like she may be feuding with one sibling in particular: Jana.


Jill and Derick recently opened up to fans about their lives.


A major topic was how much has changed about Jill’s life and values as she edges away from her family and their cult.


But, as we previously reported, Jill seems to be hinting that these changes go well beyond using birth control and wearing pants.


In the eyes of Jim Bob and Michelle, our world is evil.


They would likely see anyone reading this as sinister, and I have no doubts that they would see me the same way.


Though the two put on their awkward, false smiles for the cameras, they see their extremist cult as the only “good” that can be found in the world.


They see their sense of identity as a cult as their only safety in a world consumed by things that are the antithesis of their values — things like freedom.


As such, the family does not generally consume non-biblical media or attend any kind of real school. All of their friends must be “like minded.”


This also comes in handy when burying a scandal, like Josh’s sex crimes. The cult closes ranks and buries each other’s secrets.


Even if Jim Bob gazes upon America and deems it tainted and unworthy, he still cares enough to try to make the world a worse place for the rest of us.


This means getting involved in politics, supporting some of the most extreme social conservatives to be found on any ballot.


This year, Jed — who has no qualifications whatsoever, no real education, and zero good intentions — is running to be a state representative.


He is running as a Republican, and if you can think of a vaguely defined yet deeply malicious conservative policy, you can bet that Jed is backing it.


The entire Duggar family is generally expected to be extremely pro-Trump, not just in thought and ideology but at the ballot box.


20-year-old Jason Duggar got “creative” while mowing the lawn and carved a “TRUMP 2020” message into the landscape.


Heartbreakingly, Jana — the eldest daughter, someone whom so many hope secretly rejects her family’s ways — shared Jason’s “yard artwork,” seemingly proud of it.


To date, none of the Duggars have ever voiced support for or politically endorsed any non-Republican candidate.


However, as we reported, Jill recently shared an intriguing Instagram Story.


The message seemed to praise Joe Biden and Kamala Harris — or, at least, to acknowledge that they are worthy and loved.


“Kamala is beloved, Donald is fearfully and wonderfully made,” the message reads.


The message continues: “Mike is cherished, Joe is important enough that I died for him.”


One of the key points to many versions of Christian theology is that forgiveness is universal, and that Jesus died as a substitute sacrifice for all human wrongdoings.


Perhaps Jill shared this message — one posted by her sister-in-law through Derick before her — merely as a religious statement.


But fans are abuzz with the possibility that Jill might support and even vote for a Democratic candidate.


We don’t think that she’s quite there yet — or that she’s likely to ever be “there” while married to Derick.


But fans are also speculating that Jill may have posted the message as a subtle clapback at her sister, Jana, for sharing the pro-Trump post.


It may not even be political. Sometimes, sisters disagree and have hurt feelings and want to one-up each other. Even so … only Jill knows her motivations.

How to make Halloween more accessible to everyone
2019-10-27