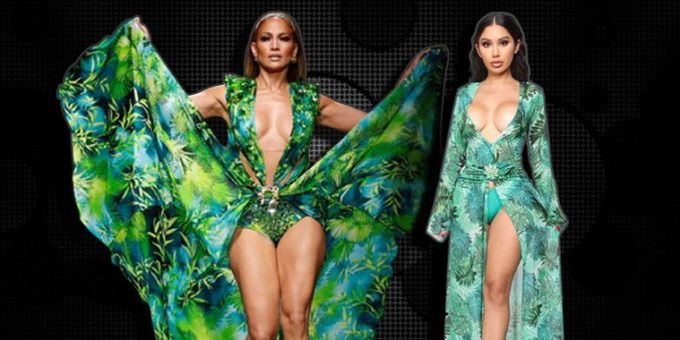 JLo’s iconic green jungle dress is back under the spotlight, but this time for the wrong reasons. According to reports, fast-fashion brand Fashion Nova has allegedly copied the iconic outfit by Italian fashion house Versace and is selling the ‘Love Don’t Cost a Thing’ dress on their website for $69.99.

According to a Fox News report, Versace has reportedly sued the retailer for selling a knockoff version of the printed green dress that features a plunging neckline, as well as several other designs. The original green dress, which raised eyebrows when it was first worn by American actress, singer-songwriter and dancer Jennifer Lopez at the Grammy Awards in 2000, was recently celebrated at the Milan Fashion Week. Lopez owned the ramp and closed the show for Versace’s Spring 2020 collection in style amid much applause.

In 2000, Lopez had worn a slightly different version of the green, leaf-printed original Versace gown. The dress even inspired the creation of ‘Google Images’ as after the Grammys, JLo’s dress became the site’s top search. It had also drawn a lot of criticism because it was perhaps ahead of its time.

According to TMZ reports, in the litigation, Versace is believed to have blasted Fashion Nova as a serial infringer specialising in ‘fast-fashion’ knock-offs. Versace officials have allegedly claimed that the brand ignored a warning from their company over the issue in July, and they’ve been left with no choice but to sue Fashion Nova for all profits from Versace design replicas.

Apparently, this is not the first time that the retail brand has come under so much controversy. Earlier this year, Kim Kardashian wore a vintage Thierry Mugler cutout gown to the 5th Annual Hollywood Beauty Awards and Fashion Nova sold a replica of it on their website for $50, literally 24 hours later.

It’s devastating to see these fashion companies rip off designs that have taken the blood, sweat and tears of true designers who have put their all into their own original ideas.

“It’s devastating to see these fashion companies rip off designs that have taken the blood, sweat and tears of true designers who have put their all into their own original ideas. I’ve watched these companies profit off my husband’s work for years and now that it’s also affecting designers who have been so generous to give me access to their beautiful works, I can no longer sit silent,” Kim wrote on Twitter after the incident.