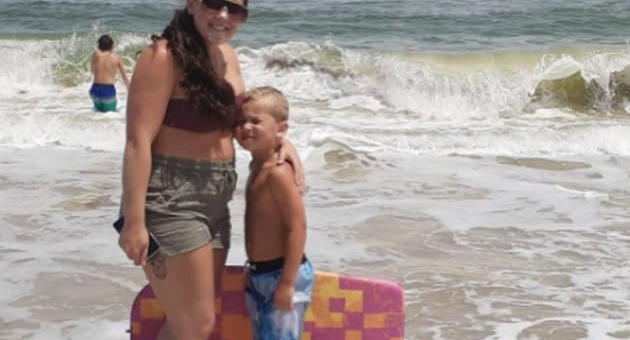 Over the weekend, Jenelle Evans and her family celebrated Mother’s Day at a beach near her home in North Carolina.


Despite the long history of violence and abuse within the Evans-Eason clan, it seemed that both parents were able to set aside their seething rage long enough for everyone to enjoy the day.


This was a mistake, largely because people on social media dislike Jenelle, and they dislike David even more.


And so, when these people saw an opportunity to pile on Jenelle in roast her in the comments section, they took full advantage.


Before we go any further, let us be perfectly clear with regard to what you’re about to read:


If you’re familiar with any aspect of her life, you know that Jenelle is a bad person.


Sadly, some of the commenters on Jenelle’s latest pic overlooked the many, many (many) legitimate sources of humor in Jenelle’s life and skipped right to posting unfair and unnecessarily cruel comments.


“Happy Mother’s Day Little late on posting but I hope you all had a good one. I’m so grateful I could have all the kids together this year #MothersDay #BeachDay #FamilyFirst,” Jenelle captioned the pics.


And as The Blast reports, the photo set received a whopping 6,100 likes in its first hour online.


Unfortunately for Jenelle it also racked up a ton of comments — and a lot of them consisted of stuff she probably wishes she hadn’t read.


One question in particular seemed to be pop up a lot, and as far as we can tell, it was inspired by the photo above:


“Gurl are you pregnant?” one fan wrote.


“When are you due?” another asked.


You get the idea.


Jenelle has been body-shamed many times in the past, and while we’re certainly no fans of Ms. Evans, we raise the same objection every time:


The fact is, no one deserves to be subjected to derogatory remarks about their appearance, and it’s especially infuriating when the victim is someone like Jenelle, as there are so many good reasons to roast her.


Just remember — good people come in all shapes and sizes, and when you ridicule their physique, you’re indirectly ridiculing those people.


Now get out there and make fun of Jenelle for being a racist, or neglecting her kids, or getting back together with the guy who killed her dog … the list goes on and on.

Priyanka Chopra steps out after two months in quarantine

BREAKING: Raksha Bandhan trailer out on June 21; Akshay Kumar to launch the trailer with an event in Mumbai : Bollywood News
2022-06-18