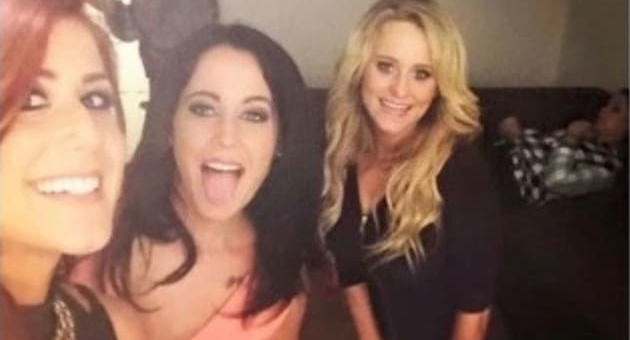 Prior to the advent of social media, you came across memories of old social gatherings only when you stumbled upon a shoebox of faded Polaroids in the back of your closet.


If, like Jenelle Evans, you were in the habit of getting blackout drunk at parties, these festivities were otherwise buried by the sands of time.


Sometimes, this can lead to a fun trip down memory lane.


But there’s also a good chance that you would have preferred to leave that particular recollection in the past.


Not surprisingly, Jenelle is one of those people who would prefer to pretend she has no past at all.


We’re guessing she would particularly prefer to avoid all memories involving her time on Teen Mom 2.


For one, they remind her of that she got fired from a cushy, six-figure gig that required her to do absolutely zero work.


On top of that, she used to be close with her co-stars on the show, and these days … well, they’re not exactly BFFs.


Evans shared a memory on Facebook this week, and as you can see, it perfectly encapsulates the way her feelings toward her former castmates have changed over the course of five years.


“Crazy kids !!!!” Jenelle initially captioned the photo that shows her hanging out with TM2 stars Leah Messer and Chelsea Houska.


But Evans wasn’t quite so enthusiastic when she shared the pic a second time this week.


We’re assuming Jenelle is using the word “fake” the way Donald Trump uses it when he talks about fake news.


She seems to be under the impression that if she takes things she doesn’t like and labels them as fraudulent, eventually the whole world will be convinced they’re actually fake.


It’s a bold strategy, but we can’t imagine it being very effective.


So what’s Jenelle’s beef with Leah and Chelsea, anyway?


The feud between Jenelle and Kailyn Lowry has earned plenty of coverage over the years, but the bad blood between Evans and her other co-stars has received far less attention.


Jenelle might have been able to remain on decent terms with Messer were it not for two factors:


1. Leah is best friends with Kail, and


As a result of the latter, Leah lashed out at Jenelle after her husband, David Eason, killed the family dog during one of his infamous fits of rage.


“ANYONE that condones/contributes/doesn’t PREVENT or STOP animal cruelty or the murder of an innocent animals life is SICK & I REFUSE to be affiliated with!” Messer wrote on social media at the time.


“I want to sympathize for my former cast mate but at this point I can’t. ENOUGH is ENOUGH!!!”


As for Chelsea … well, Jenelle might have beef with her for any number of reasons.


David clashed with Chelsea’s father, Randy Houska, after he criticized Eason’s abusive behavior on the show.


And just last week, Houska spoke out against domestic violence, and it’s likely that Evans took it personally.


After all, she’s a perpetrator herself, and she’s devoted a whole lot of time and energy to defending David’s abusive actions.


But the most likely explanation is that Jenelle is simply jealous of Chelsea in the same way that she’s jealous of all her TM2 co-stars.


It’s a sad life that Evans lives these days, and she’s constantly reminded of the ways in which things might have been different.


That would be enough to lead anyone to deny their own memories.