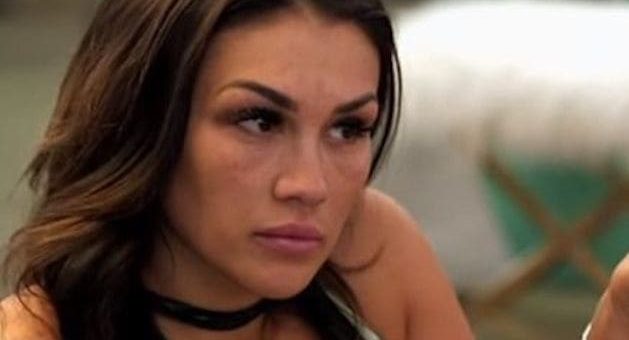 
We’ve just learned that the ex-girlfriend of Ronnie Ortiz-Magro, who shares a three-year old daughter with the controversial Jersey Shore cast member, will NOT face any legal consequences for her alleged actions this summer.


In June, Harley was arrested for domestic violence.


It later came out that she reportedly pulled a gun at the time on then-boyfriend Joe Ambrosole while the two were in Las Vegas.


Ambrosole himself made the allegation back then against Harley, while also claiming that Harley dropped the N-Word numerous times during their altercation.


According to TMZ, however, prosecutors have decided to drop the two criminal counts they’d filed against Harley this summer:


No reason was given for this decision.


Based on reporting at the time, Jen and Joe got into an argument in the parking lot of the Crazy Horse 3 strip club.


At one point, Harley allegedly starting wailing on Ambrosole and tossed his cell phone out of the car.


When Joe exited the vehicle to find it… Harley sped away.


When Ambrosole eventually arrived back home, Harley pulled the weapon on him and hurled the aforementioned racial slur in his direction.


Following her arrest, Harley checked into a rehab program, while her attorney vowed to get the charges against Jen dropped, proclaiming that she was innocent of all charges.


“We believe the charges are unsubstantiated and that overwhelming mitigating evidence exists that Jen did not commit any crime,” the statement released by Jen’s lawyer read at the time.


“We look forward to our day in court and having all charges against Ms. Harley dismissed.”


Alas, that day has now come.


Previous to that confrontation, she dragged Ronnie from a car.


Harley didn’t wind up facing any charges for either of those incidents, either.


Ronnie, for his part, was arrested in the fall of 2019 for supposedly holding a knife to Harley’s throat… grabbing their child out of her arms… and barricading himself inside of a home until the police arrived and tazed him.


Last month, Ortiz-Magro made it clear that he wants to stay as far away from his ex as humanly possible.


“I’ve moved on. She lives her life and I live my life. That’s basically what it comes down to.”


As for what the future holds for Harley?


No appearances on Jersey Shore, certainly, and hopefully no more drinking ever again.


Said the trouble star’s lawyer in the wake of these latest charges getting dropped:


“Jen is relieved that the matter is over and is looking forward to moving on from these unfortunate accusations.”

North Korea Fires Projectiles After Saying Will Talk To US: South Korea
2019-10-01