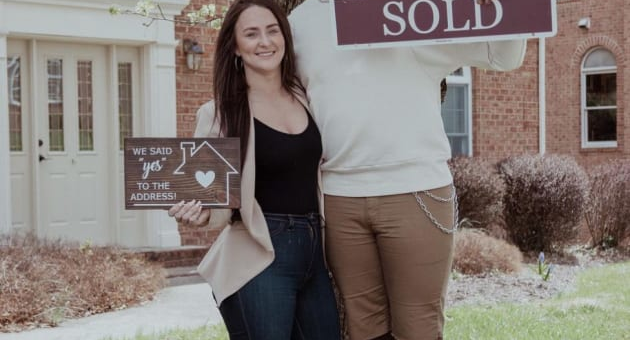 Well, we think it’s safe to say that Leah Messer has found herself a keeper!


Leah has been dating Jaylan Mobley since last summer, and Teen Mom 2 fans liked him from the very beginning.


Messer has had more than her share of misfortune in the romance department, and Mobley seems to be the stroke of good luck that she deserves.


During her time on Teen Mom: Family Reunion, Leah confessed that she’s afraid she’ll self-sabotage, and she nervously described her relationship with Jaylan as the best she’s ever had.


And if she thought the guy was too good to be true before, she must really be worried now!


Now, he’ll be living there too, of course, but based on the wording, it sounds as though Jaylan bought the house as a surprise for Leah.


“Proud to be a first-time homeowner!” the 25-year-old captioned the post.


“I am so thankful and blessed and still speechless to own this home. Surprise! @leahmesser,” he continued.


“I’m proud of you for selling your first home, and so, I wanted to surprise you with a new home, our home.”


In the pics, Jaylan can be seen holding a sign that reads, “Sold,” while Leah is holding a little plaque reading, “We said ‘yes’ to the address!’”


“I can’t wait to build, grow, and create generational wealth, legacy, and opportunities for us and our families. This is to the next chapter and really leveling up!” he went on.


“For most people, these are special moments you remember the most — and as a black young man from Charlotte, this is a dream come true.”


Jaylan added that while Charlotte will always be his home, he’s spent the happiest days of his life in West Virginia.


“Also, WV has been a second home that’s been good to me since 2018… Degrees, Friendships, Opportunities, and now a Family!” he wrote.


He ended by teasing his followers with the promise of more real estate content:


“STAY TUNED FOR THE GIRLS’ REACTION!”


The news came as a surprise to some fans, as it was just last week that viewers saw Jaylan pay his first visit to Leah’s old house.


“I like you, and because we’re trying to get to know each other, I’m trying to be vulnerable and honest and get to know you more,” Messer explained to him in the scene.


“I don’t drop this stuff onto anyone. Just telling you about my kids, that’s all. I love them. They’re my life.”


At that time, Jaylan had not yet been introduced to Leah’s daughters, but he explained that he is “really excited to meet ‘em.”


Of course, that scene was filmed over six months ago, and Leah and Jaylan have clearly come a very long way since then.


We’re guessing that Leah had some advance knowledge of the purchase, and hopefully she had a hand in picking the place out.


We might never know all the details, but one thing is for certain — she and Jaylan are definitely in it for the long haul!