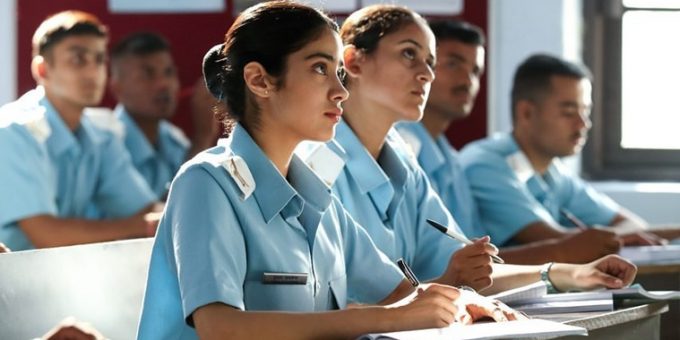 Actor Janhvi Kapoor says she is ready to put in the hard work necessary to prove herself without getting bogged down by social media storms such as the insider-outsider debate raging over her new film Gunjan Saxena: The Kargil Girl.

As the daughter of Boney Kapoor and the late Sridevi, Janhvi is used to public attention and said people won’t accept her unless she is extraordinary.

That her upcoming film is produced by Karan Johar’s Dharma Productions, which also gave her her debut film Dhadak, has fuelled the social media fire.

“You can either get bogged down by it or try to see the silver lining even though it might be hard. What I have understood from this situation is that people won’t accept me unless I am extraordinary. Which is great because they should not settle for anything less than that,” Janhvi told PTI.

Actor Sushant Singh Rajput’s death this June laid bare many schisms in Bollywood and questions on nepotism and the treatment it metes out to those who are not “insiders” have been raging.

The trailer of Gunjan Saxena, for instance, was received with several hate-filled comments, not about the film but on the issues that have polarised the Hindi film industry.

Asked how she is navigating the debate, Janhvi, 23, said it is important to take people’s sentiments into account.
She said as an actor she wants to give her best shot to the profession and return the love that people have given her parents.

“It’s true that I have got this chance easily so if I have to do something extra to prove myself, I ready to do that. Earning people’s love means a lot to me because whatever I am, I am because they gave so much love to my parents. I need to give something back. To do that through something I love is the best possible way,” she added.

Gunjan Saxena: The Kargil Girl is the inspiring true life story of flying officer Gunjan Saxena, the first woman combat aviator to fly into a war zone during the 1999 Kargil War. It premieres on Netflix on August 12.

Directed by debutant filmmaker Sharan Sharma, the film was earlier scheduled to be released on April 24 but had to bypass a theatrical release due to the coronavirus situation.

The film, produced by Dharma Productions and presented by Zee Studios, features actor Pankaj Tripathi as Janhvi’s onscreen father Anup Saxena, Ayesha Raza Mishra as her mother, Angad Bedi as her brother and actors Viineet Kumar and Manav Vij as her senior officers.

Janhvi said she personally felt very close to the story as it talks about hope.

“It is an important story and it should reach people. I think it is a story of hope. This story, meeting Gunjan ma’am and spending time with her, has reinstated my belief in myself. I hope it impacts people the way it impacted me,” she said.
The father-daughter relationship shown in the film is its real heart and Janhvi said her dynamic with Tripathi came to resemble the one shown in the film.

“I got a chance to learn from him, to talk to him about his work and movies. I was very excited. Gunjan ji looks up to her father and idolizes him and that’s how I look up to Pankaj ji. Even on the sets, I would watch him perform and seek his guidance. Basically, we had a similar relationship off camera,” she said.

Asked about taking a different route from the way patriotism is usually shown in Bollywood movies, Janhvi said they had merely tried to stay true to Gunjan Saxena’s life.

Also read: Here’s what the real-life Gunjan Saxena thinks about the Netflix film

“After talking to Sharan and meeting Gunjan ma’am, I also felt that though she is a national hero, she did not set out to be one. She just wanted to pursue her dream, and through that she did so much for the country and its daughters. Her agenda was simple and honest. That’s the lesson and the takeaway I hope people have from the film.

“There are ways of being patriotic. Everyone loves their country whether they shout it out or not. Working hard, silently and honestly is also a way to be patriotic,” she said.