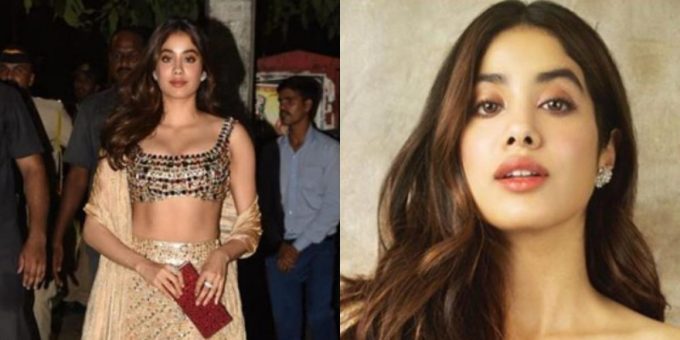 Janhvi Kapoor has fast become a household name in India and has garnered a huge fan following after her Bollywood debut in Dhadak alongside Ishan Katter. She is also no stranger to the paparazzi and is snapped almost every day when she heads out for the day. She is often spotted in her gym attire which usually features a pair of shorts and a sports bra and still manages to leave heads turning. There are also times however, when she makes an appearance at events and dresses up to the nines. From her witty charm and her good looks, Janhvi Kapoor has been making waves in the industry.

The 22-year-old starlet was recently snapped at the Bachchan residence where they hosted a fabulous bash to ring in the festivities for the auspicious occasion of Diwali. Janhvi Kapoor most certainly left jaws dropped as she dressed in her festive best. For the occasion, Janhvi Kapoor was clad in a stunning lengha choli and her hard work at the gym is most certainly showing through her toned midriff. The gold lengha featured gold beadwork all adorned all over it as well as a gold border which gave the lengha a finished look.

The lengha was paired with a fully embellished choli as well as a matching gold dupatta. Janhvi Kapoor most certainly knows how to make a statement and did so rather gracefully with this look. The actress opted for a contrasting red clutch and subtle makeup with her hair styled loose and to the side.

On the work front, Janhvi Kapoor has begun shooting for Kargil Girl in which she will be seen essaying the role of IAF pilot Gunjan Saxena and wrapped up Rajkummar Rao- starrer RoohiAfza. Janhvi Kapoor has also begun preparations for Dostana 2 which stars Kartik Aaryan and newcomer Lakshya.

Trudeau to meet with Governor General in Ottawa to form government