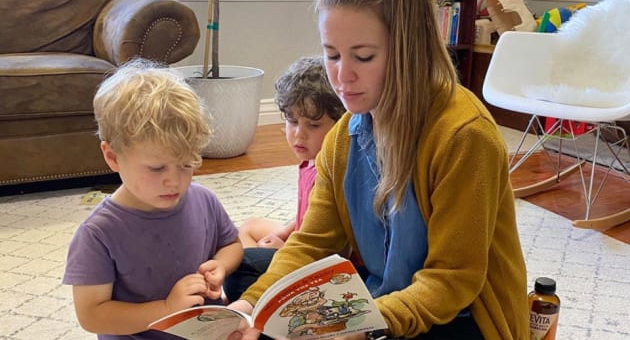 Jana Duggar is caught in the middle of a war these days.


She still lives at home with her parents, so she’s obviously at least somewhat loyal to them, but lately, Jana has been showing signs that she might someday side with her more rebellious sisters.


As you’ve probably heard by now, Jill Duggar is no longer on speaking terms with her parents.


The situation is partially a result of the ongoing feud between Derick Dillard and Jim Bob Duggar, but it was made even more tense by Jill’s decision to adopt a lifestyle that flies in the face of her parents’ belief system.


It started with violating the Duggar dress code by wearing pants and rocking a nose ring.


Recently, we learned that Jill has been drinking alcohol, which is a major no-no in her parents’ world.


Jana will probably never take her own rebellion quite that far, but it seems she is willing to join her sisters in defying the gender conventions they were raised with by wearing pants.


Yes, Jana has worn pants before but these days, she’s rocking the controversial garment more openly than ever.


Jessa Duggar posted the photo above over the weekend, and decided to share this special moment between Jana and her nephews with the world.


“Storytime with the best!” Jessa captioned the photo.


“Jess, you are too sweet! I always love hanging out with you all!” Jana replied.


Clearly, Jana and Jessa were focused on reliving the moment — but commenters were much more interested in Jana’s attire than her bond with her nephews.


“J@NAS WE@RING P@NT$!!!!!” one commenter wrote, apparently under the impression that Jessa would be deleting comments based on certain key words.


“Nice to see Jana in pants and comfortable. Keep standing up for yourselves ladies,” a second person wrote.


“I wish anyone in this family could post a photo without people analyzing if they’re wearing pants or not,” a third chimed in


“Ok who cares about the pants. It’s a special moment!” another commenter echoed.


Yes, the debate over pants is almost as tense on Instagram as it is within the Duggar clan.


Online, of course, most people are quick to applaud Jana for taking a very small step toward independence by sporting a pair of Levi’s.


Within her family, it’s a different story.


Jill and Jinger are basically in an open rebellion against Jim Bob at this point.


Jessa and Jana seem to feel that they’re caught in the middle with divided loyalties.


In the past, Jana has cropped her pants out of photos, likely out of fear of what her parents would say.


These days, she seems to have no concerns about who sees her dressing more comfortably.


We can only hope she’ll continue down this path and start defying her parents in more significant ways.