Breaking News
2022-12-08 Caryn Chandler: Is She the Reason Matt and Zach Roloff Can’t Get Along? 2022-12-08 How Rohit Sharma’s Wife Ritika Sajdeh Reacted As India Skipper Came Out To Bat With Injured Thumb 2022-12-08 5 Delicious Strawberry Desserts To Indulge In This Winter Season 2022-12-08 Kate Middleton wore a rented dress along with Princess Diana’s choker at this event 2022-12-08 Air Force peacekeepers earn US $ 9.1 Mn in one year 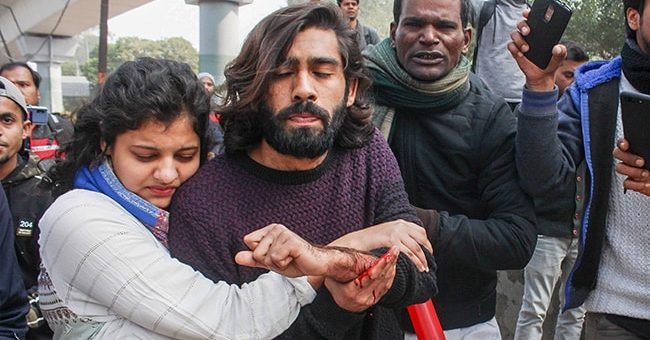 Shadab Farooq was shot at during a protest march near Jamia on Thursday.

The Jamia Millia Islamia University student who was shot by an armed teenager three days ago has said that the Vice Chancellor and the institution administration were just as much to blame as the Delhi Police for allowing the incident to happen.

“Had they taken action against police brutality in the earlier events, this might not have happened. But not only Jamia or Jawaharlal Nehru University, it’s the responsibility of every university run by people who are currently in power at the centre to take care of its students and be accountable as well as answerable to them,” Shadab Farooq, the student injured in the shooting, claimed in a statement today.

Tensions had spiralled on Thursday after the attacker, who cannot be named due to his young age, shot at students protesting the Citizenship Amendment Act in Delhi’s Jamia Nagar before walking away with cries of “Yeh lo azaadi (here’s your freedom)”. Shadab Farooq, a student of mass communication, suffered a shoulder injury in the incident.

Shadab Farooq, who is being treated at AIIMS Hospital, claimed that he first saw the attacker wandering around with a pistol while he was about to join the protest that afternoon. “As I saw some of my friends standing there, I immediately ran towards him to calm him down. People were asking the police to stop him. They were continuously shouting that he’s holding a pistol but the police didn’t listen. Instead, they kept on recording videos. I asked him to put the gun down twice. He shot me on my left forearm when I said it for the third time,” he said.

The university student said that while the shooting was “a result of hyper-nationalism”, his own action was not an act of heroism. “I did what I felt was right, and you should also stand for what is right. If the administration still doesn’t take action on it and fails to reach out to its students, then tomorrow there will be another Shadab standing in front of a bullet while the police put their hands in their pockets and record videos instead of acting,” the statement read.

Police said that the 17-year-old shooter, identified as a student of Class 12 from Uttar Pradesh’s Jewar, has been charged with attempted murder. Earlier today, the Jamia Millia University sent out a notification prohibiting any kind of protest activities on the campus.

The country has been witnessing protests since December last year, when the government enacted the Citizenship Amendment Act that makes it easier for non-Muslims migrants from Pakistan, Afghanistan and Bangladesh to become Indian citizens. Critics say that the law is against the secular principles of the country and is likely to pose a threat to the country’s Muslim community when enacted alongside the National Register of Citizens.

I think about death but I don’t worry about it: Ozzy Osbourne

Been a While Since We Won World Cup, Need To Do Lot Of Things Right To Make That Happen: Rohit Sharma
2022-10-19

Rohit Sharma Gets Pat On The Back From Virat Kohli After Impressive Knock As Test Opener. Watch
2019-10-04