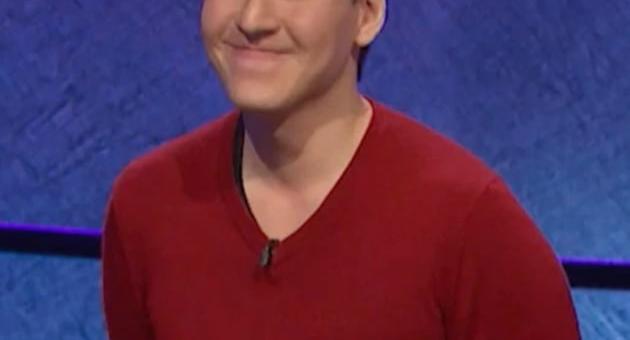 What is… someone who came oh very so close, but, in the end, failed to set a record on the country’s most popular game show?


If that is the question, we can now report the answer:


After coming out of top of 32 consecutive Jeopardy games, this polarizing contestant finally met his match on Monday night, finishing as a runner-up to a very smart opponent named Emma Boettcher.


Holzhauer was bound to lose at some point, of course.


But the timing of this defeat must sting a little bit.


It came with James missing out on Ken Jennings’ record-setting total of $2.5 million in prize money by just $58,484.


At the rate Holzhauer had been going, that’s the equivalent of just two games or so.


Holzhauer played 11 games in which he did not buzz in with a single incorrect answer — and he holds the mark for the most money ever gared in one Jeopardy game.


So… how did it all come crashing down for James Holzhauer?


He actually trailed Boettcher by $3,200 heading into Final Jeopardy.


Alex Trebek therefore called on Holzhauer second in this concluding round in order to see if he answered the question correctly… which he did. HOWEVER…


… along with gasps from Trebek and the audience.


“Oh gosh! What a payday,” exclaimed Trebek, as Holzhauer walked across the podium to give the giant-killer a sporting high-five. “What a game! Oh my gosh!”


James proceeded to be a great sport upon his defeat.


“I lost to a really top-level competitor. She played a perfect game. And that was what it took to beat me,” he told The New York Times of his loss.


He also cracked us up on Twitter by taking a jab at Drake:


And he at least has one reason to be happy that he won’t be playing again.


“My kid cried about the possibility of her dad losing, so I told her we could have a party the day after it inevitably happens. Now she cries when I win,” James recently Tweeted.


Sounds like a party is coming to the Holzhauer household!


“Nobody likes to lose,” Holzhauer added to The New York Times. “But I’m very proud of how I did, and I really exceeded my own expectations for the show.


Congratulations to both him and Emma Boettcher.

Vaccination For All Age Groups Not Anytime Soon, Says Centre
2021-04-07

Story Of Premlata Premlata Agrawal Who Climbed World’s Highest Peaks: Will To Excel
2019-03-13