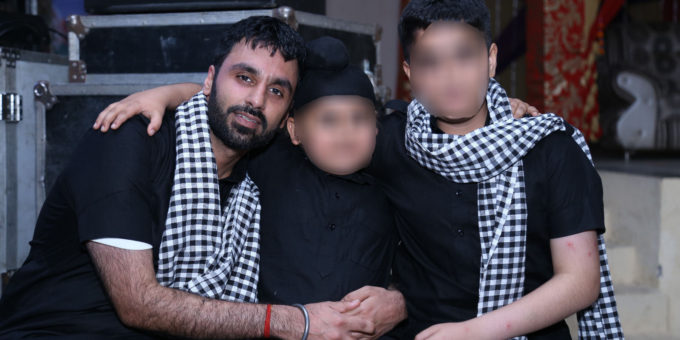 It’s approaching four years since blogger, internet marketer and fitness fan Jagtar Singh Johal was bundled into a van by plain clothes police in the Indian state of Punjab. He’d travelled there to marry his Indian wife a fortnight earlier and has since stated that a “confession” he made early in his detention was made under torture.

Known to supporters by the nickname Jaggi, he has not been formally charged over the serious allegations against him, which include membership of the proscribed Sikh nationalist Khalistan Liberation Front (KLF) and paying £3000 to fund a murder plot targeting right-wing Hindus. It’s understood he may face the death penalty.

His family, including solicitor brother Gurpreet Singh Johal, believe he was targeted by authorities for his nationality and involvement in a blog commemorating the 1984 atrocities against Sikhs in India.

International charity Reprieve says he’s been arbitrarily detained, as do many MPs. However, the British Government has refused to categorise his detention this way, a move which prevents the government from pressing harder on India to release him.

The arbitrary detention classification has been key to work to free Nazanin Zaghari-Ratcliff in Iran.

Last month Nicola Sturgeon wrote to Raab, saying her government remains “deeply concerned” about Jagtar’s treatment and requesting that the Foreign Secretary finally meet with his family to discuss the case.

In his response, Raab admitted the Prime Minister had not raised the case with Indian leader Narendra Modi during their virtual meeting in May – a step the family had hoped would help secure Jagtar’s freedom.

However, also failing to acknowledge the meeting request, Raab said Johnson had secured an “agreement to a 2030 road map for India-UK future relations, which includes an objective to promote closer co-operation in consular matters and to resolve long running or complex consular cases, of which we would consider Mr Johal one”.

In a new letter released to The National, Scottish Labour leader Anas Sarwar says that’s not good enough after Jagtar’s “brutal torture”, which is understood to have involved electrocution, and brands the charges against his “politically-motivated”.

He states: “I urge you to take immediate action to ensure he is brought home to his family in Dumbarton.”

Sarwar, whose father Mohammad is the governor of Punjab in Pakistan (the region was divided in the 1947 Partition), wrote: “You have rightly made clear that it is the UK’s policy to seek the release of UK nationals arbitrarily detained overseas. Jagtar’s detention is clearly arbitrary, having been in prison for nearly four years without trial on the basis of a torture-induced confession.

“However, you have yet to call on the Indian authorities to ensure Jagtar’s release, despite numerous meetings with your counterparts in India.”

He goes on: “I remain deeply concerned by reports that you continue to refuse to meet with members of Jagtar’s family and I urge you meet with them immediately to make clear that you are doing all you can to protect Jagtar from further abuse and bring him home.

“Most importantly, however, I urge you to publicly call on the Indian authorities to immediately release Jagtar, as a victim of torture and prolonged arbitrary detention, and bring him home to his family in Dumbarton.”

Commenting, Gurpreet said: “I’m grateful for Anas Sarwar’s support and know Jagtar will be too. When MPs and MSPs speak up, it reminds him that there is a community of people working to secure his release and gives him hope that this nightmare will soon be over.

“If the UK Government had tried even half as hard as the parliamentarians raising his case, Jagtar would be home with his family by now.”

The case has been plagued by delays over the past four years. In a recent briefing to MPs, Indian authorities blamed Jagtar’s legal team for these. He’s expected back in court in Delhi next month.

His team hopes this will result in either a charge or discharge on the six cases against him.

He’s represented by Advocate Jaspal Singh Manjhpur, whose name recently appeared on a leaked list of individuals said to have targeted for surveillance in India.

The Foreign Office says it has “consistently” raised concerns about Jagtar’s case with the government of India, “including his allegations of torture and mistreatment and his right to a fair trial”.

An Indian government official told the BBC last month that the “seriousness of charges” against Jagtar, who lives with his extended family, “have been shared with the British authorities”.

Commenting on Sarwar’s letter, Reprieve deputy director Harriet McCulloch told The National: “The key word in this letter is ‘arbitrary’. That’s important because it is UK Government policy to seek the release of British citizens arbitrarily detained overseas.

“Jagtar’s detention is unquestionably arbitrary – the case against him is based on a forced ‘confession’ he signed after being electrocuted and beaten for days. It is inexplicable that, in the four years since he was abducted, the government has made no effort to bring him home.”