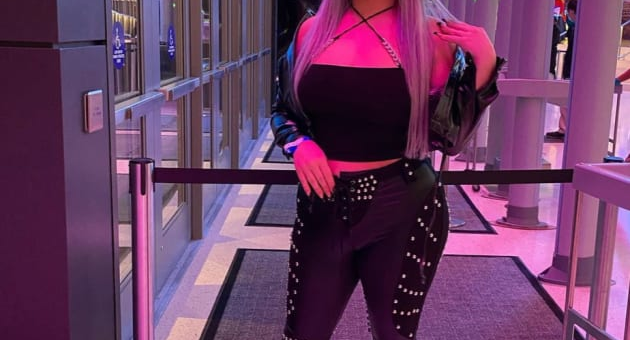 Back in October of 2021, Jade Cline had her breasts surgically enlarged.


We’re being careful with our language here, as Jade insists that despite having material implanted into her breasts, she does not have breast implants.


Because the procedure involved a fat transfer and not artificial implants, Jade objects to terms like “boob job.”


In fact, it seems she generally had pretty mixed feelings about the public’s response to her new look.


Fortunately, Jade is happy with outcome, and she’s not letting the haters get her down.


“Yeah, I got these big mommy milkers,” the 24-year-old recently told In Touch when asked about the insults that she’s received from social media trolls.


“It doesn’t really matter to me what people think or what people say as long as I’m happy and comfortable and, you know, having a baby it’s really hard on you.”


Asked about what prompted her to go under the knife, Jade gave a refreshingly candid response:


It seems she’s simply a lifelong fan of big boobs, and she decided that it was time to purchase a pair of her own!


“I was just always tiny, all around. So, I’ve always wanted bigger boobs,” she told In Touch.


“And after I had a baby, I got bigger, but not the bigger that I was going for,” Jade continued.


“I figured I would do something. I’m an adult and I can make my own decisions. And, you know, I went with someone that I knew that would take really good care of me and I don’t have any regrets at all.”


The latter procedure is known for being one of the riskier cosmetic surgeries, but fortunately, several members of the Teen Mom family have received BBLs without incident.


Jade went on to explain that despite the conclusions that others might jump to after reading about her fine-tuning, she’s always been immensely confident and proud of her appearance.


“I think self-love comes from deep within yourself, I guess,” she explained to the outlet.


“And then, I think with me, I was trying to focus on the stuff that I couldn’t change and the stuff I could change. I think a lot of people think after the surgery, that’s what made me feel good,” Jade continued.


“I don’t think the surgery is the No. 1 thing that made me feel confident. I think it was more after it.”


These days, Cline is appearing on Teen Mom: Family Reunion, and she’s already shown herself to be an indispensable part of the spinoff series.


Jade’s feud with Ashley Jones has provided the sort of drama that’s been missing from the franchise in recent years, and both moms have seen their popularity skyrocket as a result.


We hope that for Jade’s sake that as her visibility increases, she maintains a reputation that’s closer to the Chelsea Houska/Maci Bookout side of the spectrum than the Jenelle Evans/Farrah Abraham end.