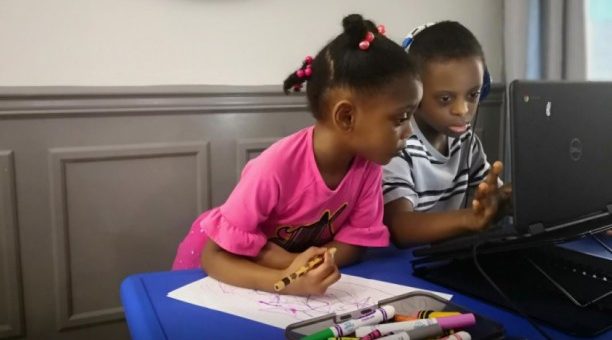 Meredith Kablick sat next to her five-year-old son Peter at home in Cheverly, Maryland, as he logged on to a Zoom video call for his first week of kindergarten at a French immersion school.

Like thousands of parents in the United States this week, the registrar assistant was supervising her child’s virtual schooling while working full-time. As with many schools from coast to coast, classes in the Washington, DC, suburb reopened online to avoid the risk of Covid-19 infection.

Her son and 17 classmates, many unaware of how to mute themselves on the video call, fought to concentrate on their teacher speaking a foreign language with the sound of barking dogs and bickering parents in the background.

“Sometimes it’s funny, but sometimes you’re just like, how is this going to go on? How can we live like this?” Kablick said. “It’s exhausting.”

The new school year had held promise of some return to normalcy for American families since the pandemic upended daily life and made much of the spring semester unproductive. But the spread of the coronavirus over the summer set off a national debate over whether to resume in-classroom instruction.

Public schools in Los Angeles and Chicago moved all classes online and New York City has pushed back the start of its blended program, with in-person and remote classes, after teachers protested against a reopening plan they felt was unsafe.

Health experts have warned against opening where Covid-19 transmission is high. But in-person schooling has a positive psychological impact that virtual learning lacks, and is important for kids who rely on school for meals, US top infectious disease official Anthony Fauci told reporters last month.

Virtual classes have shown a lower quality of learning, a Reuters survey found.

While online classes have been smoother than the haphazard online lessons thrown together in March, schools still suffer from web portals crashing, students struggle to upload assignments, and parents sweat to keep their kids focused while working, according to interviews with parents and teachers this week.

Single working parents and parents of children with special needs have a particularly tough time.

Her children, 4-year-old Gabrielle and 8-year-old Ethan, who has Down’s syndrome, need lots of supervision. This week, while her husband was away, she paced between the rooms where Ethan and Gabrielle were taking separate classes while on a conference call for work.

“Two teachers and a working mom – to be those three people Monday through Friday is very hard,” she said.

Bethany Reed, a single, working mom in Peoria, Arizona, said her son Kody, 10, has struggled to submit his homework.

“You can see the stress and the frustration on him,” she said. “And he’s never been a kid who’s worried about school.”

Still, some parents and teachers said the first days of online school this fall have been refreshingly better than last semester.

Finn Freymann, an 8th-grade English teacher at a New York City charter school, has embraced a new mindset after scrambling to help students keep up with the curriculum virtually last spring.

“Teachers are definitely settling into it as something that is not a temporary Band-aid until we can get back to the building, but it’s something that needs to accomplish the same goals as regular school,” he said.

Virtual school attendance has been higher in the first week than in the spring, two teachers said.

Some students with emotional and learning disabilities seem to be performing better at home, without classroom distractions, said Nicole Daly, a high school special education teacher in Chicago.

“I think that’s been the biggest surprise, how strongly the kids have come back and are eager to learn,” Daly said.

In Austin, Texas, Jason Jepson said he and his wife have spent nearly six hours this week calling school district representatives because his seven-year-old daughter Harper was unable to log onto classes.

All the school’s various online class platforms have crashed at different times, said Jepson, a brand communications professional who sees no choice but to bear the burden of making sure his daughter is learning.

“I have to figure out how to drink more caffeine, get less sleep and still be a good dad, because that’s my only option. It’s her education,” Jepson said.

3 Dead As Truck Hits Bike, Mows Down Another After Driver Tries To Flee: Cops