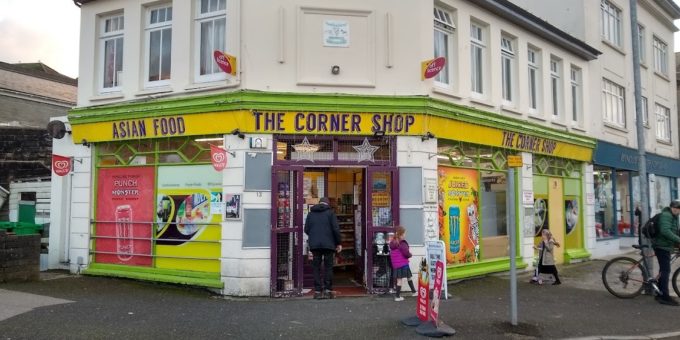 A shopkeeper who has suffered racist abuse by gangs of children in her store over Christmas has said the taunts made her “very sad”.

Heidi Ocampo, 49, has been running The Corner Shop in Berkley Vale with her partner Mr Wallace for the past five years, after moving down from London.

As reported in the Packet this week, concerns have been raised with the Falmouth police by the town council about gangs of youths causing trouble.

Residents and businesses being targeted by group of 12 to 15-year-olds, police told

Heidi who is originally from the Phillipines has had full drinks bottles thrown at her shop window while she and customers were inside and children banging their fists on her windows.

Worse still she has had children, some as young as 12, standing in her shop door shouting “Ha, ha you P*k*, even though she is Filipino. She said the incidents happened nearly every day over the Christmas holidays.

“It makes me very sad,” she said. “They think I am Pakistani because it is the only one they know, but it is racist bullying of me. I’m not happy even though it doesn’t mean anything to me because I am Filipino, but I don’t want them doing it to other people.”

She said during the Christmas holidays there were gangs of children aged 12 to 16 hanging around everywhere. Since the schools had gone back though things had calmed down.

She said the problems started when a parent came down and accused her of selling their child a Monster Energy drink.

Ms Ocampo says she tries not to sell high energy drinks to children under 16 but on this occasion she’d let three girls buy one can after questioning them over whether their parents would allow it to which she was told ‘yes’.

“I was very upset because they are blaming me saying maybe I’m selling alcohol and tobacco to the youngsters and I said ‘No. I didn’t do that’.

“The next day children come in here groups by groups and bully me shouting in the doorway shouting ‘Ha, ha, ha P*k*, P*k*’ and running away.

“In one day three times they are banging on my window with their hands and running away. I don’t know why they do that.”

“I am trying to be kind to kind to the young children. I am not saying I am generous but you know sometimes children have no money and they are together with other children be buying something but didn’t have anything so I said ‘Would you like some sweets?’. I am a mother, I was a nanny for 24 years in London so I know about looking after children.

“The sad thing is when they bully me like that I feel ‘Wow, no respect’. Respect, the big thing there is respect.”

She says the last time she called the police they were there in ten minutes with two police officers. But during the holidays the gangs of children were around nearly every day.

“Perhaps because they are young children they don’t know what they are doing,” she said “but it’s not funny. Maybe their parents need to have a word with them before they let their children out.”