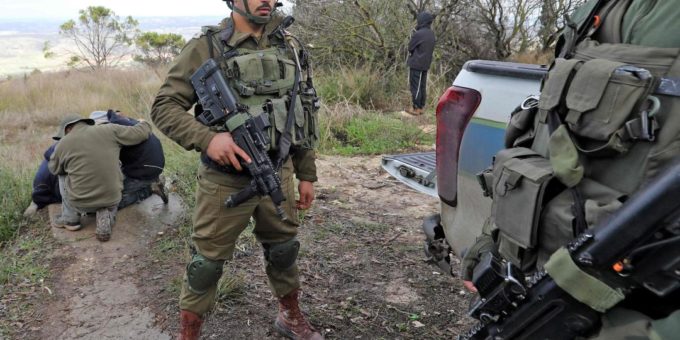 JERUSALEM: Israeli soldiers carried out a manhunt Friday in the occupied West Bank, a day after the army blamed Palestinians for shooting dead an Israeli settler and wounding two others.
The army, which said Palestinian “terrorists” carried out the attack, has deployed three extra battalions as well as special forces.
“We are in a physical, technological, intelligence hunt,” Israeli army spokesman Brig. Gen. Ran Kochav told 103FM radio.
“We arrested last night a number of suspects… sooner or later we will find the perpetrators.”
Thursday’s shooting followed high tensions after Palestinian attacks on Israelis, and the killing of Palestinians by Israeli troops during clashes.
Army radio identified the victim as religious student Yehuda Dimentman, 25, a married father.
He studied at Homesh, an outpost that is illegal under Israeli law.
Israel seized the West Bank in the 1967 Six-Day War. Since then nearly 700,000 Jewish Israelis have moved into West Bank and east Jerusalem settlements that much of the international community regards as illegal.
Dimentman was shot while in the back seat of a car leaving Homesh on Thursday evening, and died en route to hospital, the Israeli army and medics said.
The car’s driver and another passenger were injured by shattered glass and taken to hospital, but their wounds were not reported to be serious.
No one has claimed responsibility for the attack.
However, multiple Palestinian organizations — including Hamas, the militant Islamist group which controls the Gaza Strip — praised the shooting.
US State Department spokesman Ned Price said Washington condemned the attack on Thursday as a “terrorist attack… that killed an Israeli citizen and wounded two others.”
On Friday, mourners gathered at the site of the attack, army radio reported.
Dimentman’s brother Shlomi described him as “a beloved uncle.” Speaking on Israeli public radio, he said Dimentman was devoted to “strengthening the hold on the community of Homesh.”
Last week Israeli police arrested a 14-year-old Palestinian girl suspected of stabbing her Israeli neighbor — a 26-year-old mother walking with her children — in annexed east Jerusalem’s Sheikh Jarrah neighborhood.
Tensions have also been rising within Israel’s ideologically divided coalition government over reports of violence inflicted by settlers on Palestinians.