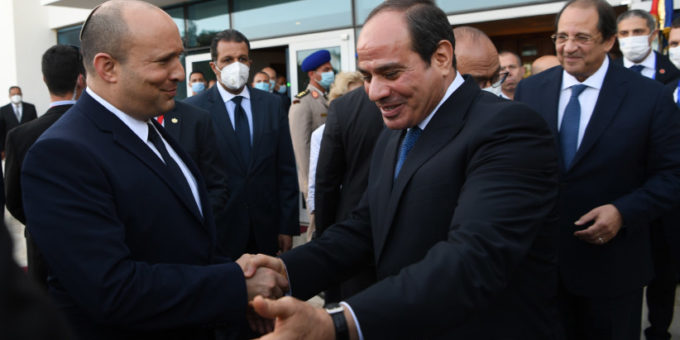 The meeting between Prime Minister Naftali Bennett and Egyptian President Abdel Fatah a-Sisi focused on bilateral ties between the countries, in keeping with Bennett’s view that the Palestinian issue does not need to be the central matter in Israel’s relations with its neighbors and beyond.

Bennett primarily spoke with Sisi about ways to strengthen Egypt-Israel ties, he told KAN 11 on Tuesday.

“There have been 40 years of peace, but almost no trade,” he pointed out.

A senior diplomatic source explained that “the thing we wanted and want consistently, not just from Arab states, but in general, is that the Palestinian issue will not be stuck in the middle of bilateral matters. OK, we’re Israel, have a conflict, but that’s not the core of the relations,” the source said.

The prime minister’s visit to Sharm a-Sheikh was the first meeting of an Israeli prime minister and an Egyptian president in Egypt in a decade. It took place amid a spike in violence on the Gaza border and as Egypt tries to mediate between Israel and Hamas to bring calm.

However, sources close to the prime minister said that the meeting was primarily focused on Egypt-Israel cooperation on security, geopolitical and economic matters, and not the Palestinians.

Sisi and Bennett met one-on-one for almost three hours, shooing away their top advisers more than once when they came in to hold a bigger meeting.

Bennett said after the meeting that “we created a foundation for deep ties in the future,” and the senior diplomatic source said the bond formed between the leaders is very important to the countries’ relations.

Notably, an Israeli flag was present for all of the meetings, unlike in the past, which was just one factor reflecting a greater warmth after over 40 years of a cold peace between Israel and Egypt.

The diplomatic source said the Prime Minister’s Office told the Egyptian Presidency that an Israeli flag must be there for the prime minister’s meeting, and there was not much pushback.

“We’re not forcing any Arabs to embrace us. Our sense of legitimacy doesn’t come from an embrace from anyone. But when you’re not desperate, things happen on their own; it’s like dating,” the source quipped.

The exact date of Bennett’s trip had been censored in Israel and Israeli media was not able to accompany the prime minister, because of very tight security arrangements.

As such, in a rare move, the Egyptian Presidency put out a statement to the press about the visit before the PMO did.

The public nature of the trip added to previous indications of a warming of ties, like when Egypt and Israel’s energy ministers held a press conference in Egypt early last year.

When it came to discussions about Gaza, the emphasis was on stopping smuggling of arms into Gaza through the Rafah crossing in Egypt.

“Egypt is a restraining factor,” Bennett told Channel 12. “They don’t control Hamas, but they have significant influence. Rafah crossing needs to be tightened. They did a little, but more can be done.”

Bennett said Israel’s goal when it comes to Hamas is twofold: to stop the terrorist group from attacking Israel and to stop it from amassing weapons.

“We won’t let Hamas bet more and more rockets, like Hezbollah,” he vowed, and pointed out that under his government, the IDF strikes back at Gaza over incendiary balloons, while his predecessor didn’t even respond to every rocket launch.

Asked if that means another military operation in Gaza is imminent, Bennett said: “I am not looking for wars. Defense Minister [Benny Gantz] took it upon himself to find an arrangement for long-term calm in Gaza. If that doesn’t happen, there are alternatives.”

Bennett met with the family of Avera Mengistu, an Israeli civilian in Hamas captivity since 2014 the day after the meeting

Bennett told the family that he is “personally committed to bringing back the Israeli soldiers and civilians from Gaza, and his door is open to them,” the Prime Minister’s Office stated.

In addition to Mengistu, Hamas has held civilian Hisham al-Sayed since 2015, and the bodies of IDF soldiers Hadar Goldin and Oron Shaul since 2014.

Amid reports that Sisi hoped his overtures to Israel would improve his relations with the Biden administration, State Department Officials told The Washington Post that they will place new conditions on its security aid to Egypt over human rights violations.

Egypt receives $1.3 billion in aid from the US.

Of that, $300 million are contingent on meeting human rights standards. The Biden administration will send $170 million for counterterrorism, but another $130 will reportedly be held unless Egypt ends its prosecutions of rights NGOs and drops charges against 16 individuals.

England vs Ireland 1st ODI: When And Where To Watch Live Telecast, Live Streaming
2020-07-29