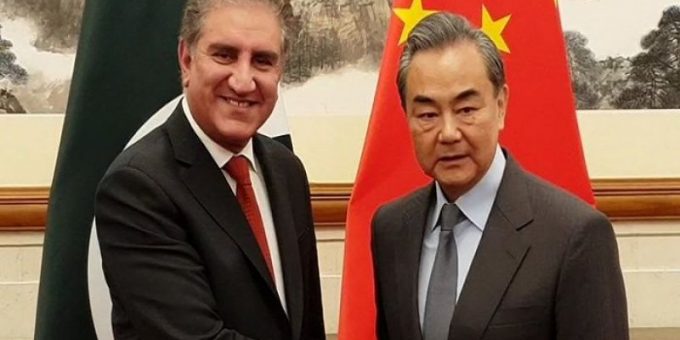 During the conversation, Chinese Foreign Minister Wang Yi told Qureshi that Pakistan’s offer for help and support to China in this difficult time once again highlighted the deep friendship between the two neighbours.

Wang noted that Pakistan had nearly a thousand citizens in Wuhan, and also thanked the Pakistani government for trusting the Chinese government and deciding not to rush them out of the country.

In the same phone call, Wang noted that a certain country has turned a blind eye to the recommendations put forward by the World Health Organisation and “imposed sweeping travel restrictions against China”.

“This kind of overreaction can only make things even worse. It’s not the right way to deal with the pandemic,” Wang told Qureshi. The Chinese foreign minister also assured him that Beijing will continue to safeguard the safety and health of Pakistanis and provide them with all necessary assistance.

Wang Yi remarked that both China and Pakistan were close neighbours and had a fine tradition of helping each other.

He stated that under President Xi Jinping’s personal deployment, China had established a nationwide mechanism and taken decisive measures to prevent and control the epidemic.

“At present, all work is progressing in an orderly manner, and China is fully capable and confident in achieving its final victory,” he added.

In their phone call, Qureshi told Wang that he was confident that China will “surely win” the battle against the coronavirus outbreak under President Xi Jinping’s leadership.

Qureshi in the conversation also told Wang that Pakistan was willing to provide China with all help in fighting the epidemic and added, “the Pakistani side will send military supplies to China in the near future.”

“The international community generally appreciates China’s timely and effective measures to deal with the epidemic, but there are also some forces trying to take the opportunity to create panic, and Pakistan firmly opposes this,” assured Qureshi.

The phone call between the two leaders comes at a time when China faces deepening isolation over its coronavirus epidemic with the United States leading a growing list of nations to impose extraordinary Chinese travel bans.

With Britain, Russia and Sweden among the countries confirming their first infections, the virus has now spread to more than two dozen nations, sending governments scurrying to limit their exposure.

The US toughened its stance Friday by declaring a national emergency, temporarily barring entry to foreigners who had been in China within the past two weeks.

A virus similar to the SARS pathogen has killed 259 people in China and spread around the world since emerging in a market in the central Chinese city of Wuhan.

On Saturday, China’s National Health Commission said nearly 12,000 people have been infected by the novel coronavirus.

Outside mainland China, there have been more than 100 infections reported in more than 20 countries.

The World Health Organisation has declared an international emergency over the outbreak.

Pakistan on Friday halted flights to and from China with immediate effect, a civil aviation official said.

The Pakistani government has said it was monitoring the situation in China and is in close contact with the relevant authorities in order ensure safety of Pakistani students in Wuhan amid a coronavirus outbreak that has killed 170 people, the Foreign Office said on Thursday.

“Islamabad has taken up the issue of food shortages with concerned officials and we are assured by the Chinese government of full cooperation in this regard,” Foreign Office Spokesperson Aaisha Farooqui said at a press briefing.

In response to questions about the evacuation of Pakistani citizens from Wuhan, the epicenter of deadly virus, the spokesperson said, “Islamabad is monitoring the evolving situation and will take a decision after consultations among all the stakeholders.”

Over 50,000 Passengers Screened Till Now For Coronavirus At Airports