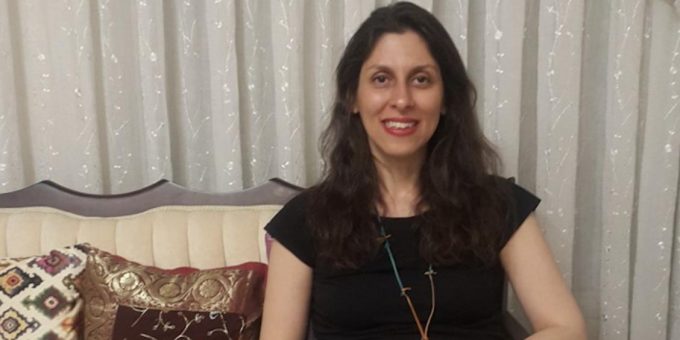 LONDON: British-Iranian aid worker Nazanin Zaghari-Ratcliffe is being subjected to “psychological torture” by the Iranian regime as her hopes of being granted clemency were dashed yet again, her husband said.
Zaghari-Ratcliffe, 41, spent last week having nightmares whilst she waited to discover her fate on Friday, Richard Ratcliffe said. “There’s no news today,” was all she was told.
“It is fair to say that what Nazanin has gone through amounts to psychological torture,” he told the Observer.
“The supreme leader [Ayatollah Ali Khamenei] has granted clemency to everyone who meets certain criteria. Nazanin meets the criteria,” Ratcliffe added.
However, there is a dispute between the judiciary, who are trying to uphold the law, and the Revolutionary Guard, the aid worker’s lawyers told Ratcliffe.
The uncertainty has left Zaghari-Ratcliffe “deflated”, “unsettled” and desperate to see her five-year-old daughter, Gabriella, in England, Ratcliffe said.
“The Revolutionary Guard have had no problem making a mockery of Iranian law,” he said. “But this is the first time we’ve had a situation where not only is the Iranian foreign ministry, behind closed doors, trying to solve this for diplomatic purposes, but also the judiciary are trying to solve this case.”
In mid-March, Zaghari-Ratcliffe was temporarily released from Tehran’s notorious Evin prison for two weeks along with thousands of other prisoners in a bid to contain the rapid spread of coronavirus in Iran. The furlough was extended until May 27.
However, her hopes of being granted clemency were dashed for the second time in a week on Friday when she was informed that a decision had not been made.
Zaghari-Ratcliffe, a project manager with the Thomson Reuters Foundation, has served nearly four of her five-year sentence.
She convicted of plotting to overthrow Iran’s clerical establishment, a charge her family, the foundation and its news subsidiary Reuters deny.
She was arrested in April 2016 at a Tehran airport as she headed back to Britain with her daughter after a family visit.

Christo, Artist Who Wrapped and Festooned on an Epic Scale, Dies at 84

Khloe Kardashian Let Tristan Into the Delivery Room Again! Why?
2022-09-23