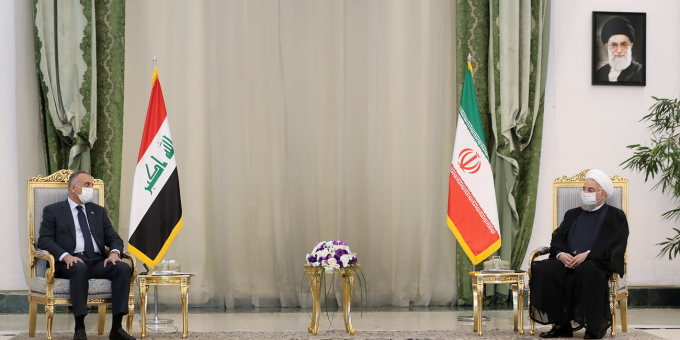 TEHRAN: Iran’s President Hassan Rouhani called a visit on Tuesday by the new prime minister of Iraq, where the US military has a presence, “a turning point” in the countries’ relations and vowed to continue supporting the neighboring Arab nation.

The official website of the office of the Iranian presidency later released a photo of Rouhani and Al-Kadhimi at a welcome ceremony in Tehran, showing both wearing protective face masks to help prevent spread of the coronavirus.

“We are certain that the visit will be a turning point in relations between the two countries,” Rouhani said after meeting with the Iraqi premier. “We still remain ready to stand by the Iraqi nation and apply efforts for stability and security in Iraq and the region.”

Al-Kadhimi replied: “Iraq will not allow the posing of any threat from its soil against Iran.”

Iran sees the US military presence in Iraq a threat to Tehran.

The visit came after Iranian Foreign Minister Mohammad Javad Zarif traveled to Baghdad over the weekend. It was Zarif’s first visit to Iraq since a US airstrike in January killed a top Iranian general, Qassem Soleimani, outside Baghdad’s international airport. The strike catapulted Iraq to the brink of a US-Iran proxy war that could have destabilized the Middle East.

In Baghdad, Zarif paid a visit to the site where Soleimani was killed, saying “Iran-Iraq relations will not be shaken” despite the general’s death. Soleimani led Iran’s expeditionary Quds Force and was the architect of its regional military activities.

However, Khamenei vowed to take revenge for Soleimani, saying: “We will definitely strike back at the US in response to the assassination of our general.,” Iranian daily, Radio Farda reported.

In Tehran, Al-Kadhimi said Iraq’s foreign policy is based on “balance and avoiding any alignment.” The Iraqi premier said his country seeks to improve relations with Iran “based on nonintervention in domestic affairs of the two countries.”

A former intelligence chief backed by Washington, Al-Kadhimi took office in May after he had played a significant part for years in the war against the Daesh group, which was declared defeated in Iraq in 2017.

The Iraqi prime minister had planned a visit to Saudi Arabia on Monday, before his trip to Tehran, but postponed it following news that Saudi King Salman was admitted to a hospital in the capital, Riyadh.

Iran sees Iraq as a possible route to bypass US sanctions that President Donald Trump reimposed on Tehran in 2018, after pulling America out of the 2015 nuclear deal with world powers.

Since the outbreak of the coronavirus, religious tourism between Iraq and Iran has stopped. Before the pandemic, some 5 million tourists — bringing in nearly $5 billion a year — visited Shiite sites in the two countries. Under former dictator Saddam Hussein, Iraq waged an 8-year war in the 1980s against Iran, a conflict that left nearly 1 million killed on both sides.

In another development, a German national was kidnapped late on Monday outside her office in central Baghdad.

Hella Mewis, a who ran arts programs at the Iraqi art collective Tarkib, had left her office and was “riding her bicycle when two cars, one of them a white pickup truck (of the type) used by some security forces, were seen kidnapping her,” the security source said.