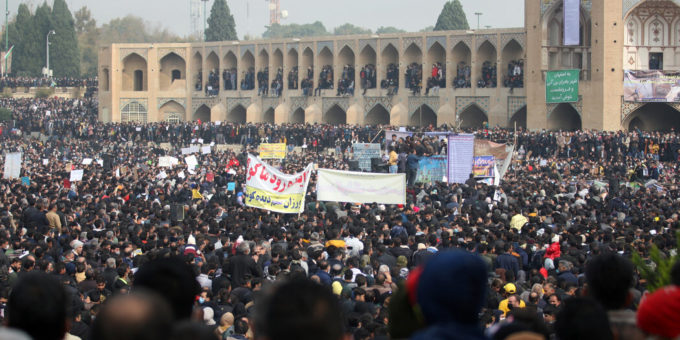 But after the protests spilled over to at least one other city, the predictable happened on Friday: The government violently cracked down.

Security forces wielding batons, shields and guns swarmed the city’s riverbed around 4 a.m. Thursday as a group of farmers were sipping tea and chatting about protest strategy around a campfire.

The security forces had used a megaphone to tell farmers they had 10 minutes to evacuate, Hassan Tavakoli, a 47-year-old farmer from Isfahan, said in a telephone interview. His account was backed up by several videos that were shared with The New York Times by Isfahan residents.

“Before we had a chance to move, suddenly our tents were set on fire and they started throwing tear gas at us and shooting in the air,” Mr. Tavakoli said. He said the crowd included several families with young children and two babies.

“I never expected them to do this to us, to beat us, fire at us and injure farmers,” he added.

For more than two weeks, Mr. Tavakoli and hundreds of other farmers had been protesting on the dry bed of the city’s storied Zayanderoud River. Tens of thousands of people had joined them in a show of solidarity.

Their demand: Restore water flows to the river to help irrigate farmlands laid to waste from years of mismanaging water resources.

“We have nothing left of our lands and livelihoods, we are just asking for our water rights,” said Mr. Tavakoli. He owns three hectares of farmland that was once lush with crops of wheat, barley, and vegetables. The land has been dry and barren for 15 months, forcing Mr. Tavakoli to sell his livestock to survive.

Iran has been facing increasing water scarcity issues because of years of mismanagement. In the case of Isfahan, water has been diverted through underground pipes away from farmlands and toward industrial complexes in the desert province of Yazd and for drinking water to the religious city of Qom.

Iran Meteorological Organization estimates that some 97 percent of the country is dealing with drought at some level. The country’s former energy minister warned in May that Iran was facing its driest summer in 50 years and that temperatures approaching 50 degrees Celsius — 122 degrees Fahrenheit — would lead to cuts in electricity power and shortages of water.

Protests in July over water shortages, mostly staged by farmers from the ethnic Arab population in Khuzestan Province, were also violently crushed by the government. As a temporary solution, officials opened a dam, and water flowed back to the river, helping irrigate the farmers’ land and hydrate livestock.

In Thursday’s crackdown, security forces demanded the farmers issue a statement announcing their sit-in had ended even though no resolution had been reached and the government had not taken steps to address their concerns, Mr. Tavakoli said.

On Friday, as people gathered to protest, security forces lashed out with more violence. Clashes spread from the dry riverbed to streets in downtown Isfahan. Security guards fired bird shots and tear gas at the crowds of protesters and beat them with batons, according to two eyewitnesses in the area and videos shared widely on social media.

There were no official casualty numbers, but videos and eyewitnesses said scores of demonstrators were injured. Mr. Tavakoli said dozens of farmers were also badly injured in the clashes, but he had not heard of any reports of deaths. Rights activists said dozens of people were arrested.

Videos on social media showed a woman clad in a black chador bleeding from the nose; a middle-aged man with blood running down his face from a bruised swollen eye; and a man’s bare back riddled with red spots, apparently from bird shots.

Some videos showed protesters throwing stones at anti-riot police and chanting “shame on you” and “death to the Dictator” and “death to Khamenei,” targeting Iran’s supreme leader, Ayatollah Ali Khamenei, who has the last word in all key state and security matters.

Mobile and internet service was disrupted in Isfahan and Khuzestan, residents reported, as they government sought to cut off communication and organizing.

“This is water bankruptcy, there are lots of water right holders but not enough water in the accounts,” said Kaveh Madani, a world renown water expert and former deputy head of Iran’s environment agency. “People upstream and downstream of Zayanderoud are asking for water for all. But this is mission impossible.”

The Zayanderoud River snakes through the historic city of Isfahan. Its leafy riverbanks are the city’s main green space, and families gather on summer evenings for picnics. In the fall, the river serves as a stop for migratory birds flocking south.

‘Omicron’ May Be A Wake-Up Call: WHO’s Dr Soumya Swaminathan