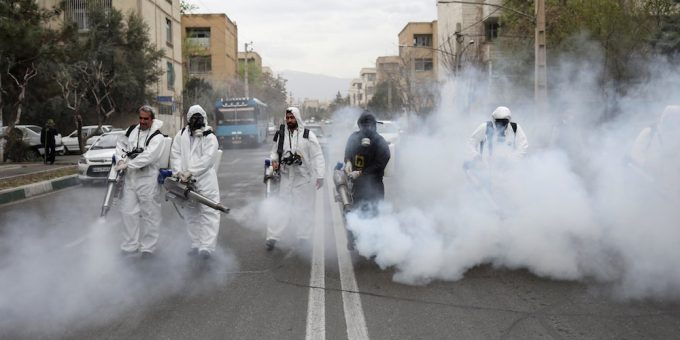 BEIRUT: Lebanon has become one of the latest countries to close its land, air and sea borders in a bid to slow the spread of the killer coronavirus and avoid overwhelming hospitals.

President Michel Aoun on Thursday presided over a Lebanese Cabinet session wearing a face mask and ministers were asked to don gloves and face shields while keeping a safe distance between each other to help prevent transmission of the virus.

“It was my first time wearing a face mask because the risk has increased,” said Minister of Health Hamad Hassan at the end of the meeting.

“Six new unknown-source cases were detected. They were the result of a community transmission, which makes the situation more dangerous. I requested the isolation of the two regions with the highest number of cases. I also asked the security forces to be strict to the point of prohibiting people from leaving their houses,” he added.

Meanwhile, during a meeting with representatives of international organizations, UN Secretary-General Antonio Guterres said: “The UN is ready to assist Lebanon, its government and people during these difficult times facing the country, the region and the world.”

Despite power cuts and water shortages in some parts of the country, many Lebanese citizens set up temporary offices to work from home. Meanwhile, security personnel issued tickets to those breaching government orders banning gatherings and the opening of stores.

Private and public transport in the country has almost ground to a halt, but food shops did not report any of the frantic scenes of panic buying witnessed in Europe and the US.

As cases of the virus continued to rise, Rafik Hariri University Hospital (RHUH) on the outskirts of southern Beirut, said it was running short of coronavirus testing kits and would have to limit their use to urgent patients only until a delivery of 20,000 packs arrived from abroad.

In a message to employees and the Lebanese people, Mohamad El-Hout, chairman of Middle East Airlines (MEA), which has been forced to ground its fleet, said: “MEA had faced many similar hardships before, where its fleet was grounded for many days. However, the company is able to overcome this situation and has the capabilities to do so. We will receive new aircraft and fly again.”

One pilot and two flight attendants were infected while working on flights bringing Lebanese citizens back home from countries affected by the coronavirus.

Lebanese workers faced with the prospect of being laid off due to business closures have been appealing for financial help.

“The private sector is living the most difficult and dangerous stage of its history because all the negative factors have hit the country at once, with the latest one being the spread of the coronavirus,” said Mohamed Choucair, president of the Lebanese economic organizations.

“I hope that the general mobilization and the health emergency declared by the government were accompanied by a set of incentives to cut the losses institutions are suffering from in the same way that other countries have,” the former minister added.

He warned that a social explosion would be disastrous for the country.

Rajkummar Rao on completing a decade in Bollywood: It is just a humble beginning for me