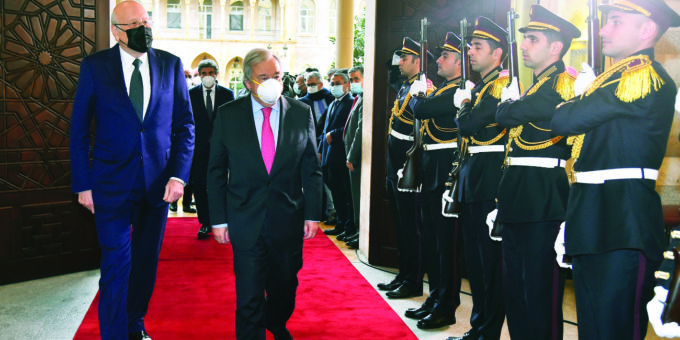 Guterres also said Lebanon needed proper accountability for last year’s port explosion and that elections due to be held next year could usher in political stability in the country.

His comments followed a meeting with Parliament Speaker Nabih Berri and a visit to the port, where he laid a wreath at a memorial for the hundreds who died when chemicals stored at the facility for nearly seven years exploded.

Guterres was keen to record his observations on the second day of his official visit to Lebanon.

He said that only the Lebanese could solve Lebanese problems, and he renewed his call for political leaders “to come together” to overcome divisions.

He inspected the blast site for the first time, reviewing the damage to the port and its surroundings, despite the stormy and rainy weather.

A minute’s silence was observed in front of a plaque honoring victims of the explosion.

In notes distributed by his media office, the secretary-general said he visited the port to pay tribute to the victims who had lost their lives and to express his solidarity to the wounded and their families.

His day included an extensive meeting with representatives of international bodies and organizations, chaired by Guterres and Lebanese Prime Minister Najib Mikati.

Arab News learned that the importance of the meeting stemmed from its conclusion that the efforts of UN agencies “must coordinate with each other on the ground in order to produce more effective work.”

Guterres said that Mikati confirmed “the government’s commitment to conduct negotiations with the IMF and its commitment to carry out a number of necessary administrative and financial reforms” to promote economic recovery.

UN Secretary-General Antonio Guterre says Lebanon needs proper accountability for last year’s port explosion and that elections due to be held next year could usher in political stability in the country.

Mikati stressed Lebanon’s “adherence to the role of the UN Interim Force in Lebanon in the south, respecting international resolutions.”

He highlighted Lebanon’s “commitment to the policy of disassociation from any dispute between Arab countries, as was its decision in 2011” and that Lebanon would not “in any case, be anything but a unifying factor among the Arab brothers, and is keen on the best relations with all its friends.”

He said Lebanon needed urgent aid in many areas, with a focus on delivering aid to the poorest and middle-class groups, in addition to marginalized segments.

He stressed the need to give special importance to expanding the social protection network, and said the government was “determined” to hold parliamentary elections on time without delay. “We look forward to the unwavering support of the UN,” he added.

The UN chief took part in an important meeting with religious authorities and listened to the positions of Lebanese sects on the developments in Lebanon.

Their speeches reflected the political divergence in Lebanon.

They affirmed their “commitment to the values of openness, tolerance and coexistence, as they are the essence of Lebanon’s identity and stability” in a joint statement, and encouraged “the adoption of dialogue as a means of resolving differences in the spirit of consensus and teamwork.”

The UN chief also visited the northern city of Tripoli, where he inspected centers and schools that provide services to residents and refugees. He met women leaders and activists.

His talks with Berri focused on the presence of UNIFIL forces in southern Lebanon and “the need to end all violations of the ceasefire.”

Guterres said the speaker had drawn his attention to the “violations of the airspace of Lebanon, and also the need for total implementation of the resolutions of the UN Security Council.”

“We discussed the importance of the cooperation between UNIFIL and the Lebanese Armed Forces that the international community needs also to support much more strongly. In the scope of our activities, we will also be doing everything we can in order to facilitate the negotiations that hopefully will lead to a rapid solution for the delimitation of the maritime border.”

During a joint press conference, Berri said: “If there is a disturbance in a place, the responsibility lies with Israel, which occupies our land, and not with us. Every day, there is an Israeli violation of the Lebanese airspace, and they even use our airspace to strike Syria.”

His words came against the backdrop of a UN demand for Lebanon to facilitate the mission of UNIFIL forces during their work on the ground.

Hezbollah often obstructs the work of these patrols on the pretext that they are entering private property.

Sonu Sood on not receiving Padma Shri award – “For me, the biggest award is the love of the people” : Bollywood News
2021-11-14