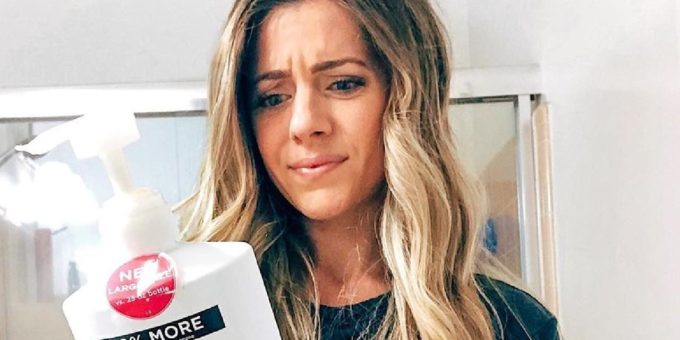 A health and wellness influencer is copping major backlash after claiming something many of us use on a daily basis is the reason we’re gaining weight.

Eleni Chechopoulos, an Instagram influencer and founder of Gut Rehab Blueprint, took to Instagram to tell her 11,000 followers their “battle with the scale” was because of their shampoo.

But her controversial message has been met with disbelief from many experts, including Belinda MacDougall, CEO of Australia’s fastest-growing health food company, The Healthy Happy Co, who told news.com.au the comments were completely “ridiculous”.

“To say shampoo is the reason we are overweight is ridiculous and while chemicals in all beauty products can be bad for our health, weight gain is far more related to what we eat,” she said.

“If only shampoo was the answer, how easy that would be to fix this health crisis we face. Sadly, I think our weight gain has more to do with the cereals, takeaway, pizza, processed foods, wine, beer and soft drinks.”

It’s not just the experts slamming Ms Chechopoulos claims, with many sharing the post online accusing it of being “fatphobic”.

This is next level fatphobic. Encouraging women to think and worry about the number of calories in SHAMPOO and it’s effect on weight gain. Jesus wept. pic.twitter.com/VfZLoxEXDW

This is so dangerous to promote! When my eating disorder was at its worst this would have badly triggered me and would of just given me another thing to obsess over. ?

I knew it was my shampoo, shaving gel, moisturiser and body wash making me fat. Collectively known as shower gel.

this girl also calls herself a “gut & hormone nutritionist” despite having no credentials except some crunchy holistic fake news one lmfaoooo you have to laugh https://t.co/sANimdtWBs

In her lengthy post Ms Chechopoulos levied her claims around studies on mice involving “obesogens” a chemical found in many cosmetic products that she said “disrupts” how your body creates and stores fat.

“Even though you eat healthy and exercise every day, you still might battle the scale because of your SHAMPOO.”

Bruce Blumberg, Professor, Developmental & Cell Biology at the University of California previously wrote about these studies in a piece for The Conversation, concluding that “overeating calorie-rich foods and sedentary lifestyle” were the main cause of obesity.

He did agree that obesogens may possibly play a role – as the mice exposed to these “fat stimulating chemicals” gained weight while those who weren’t remained the same, despite eating the same diets.

However, he stated “there is little information available about effect in humans”.

“On the face of it, the thought that using shampoo makes people fat is up there with claims that eating bread crusts makes your hair curly and puts hair on your chest,” he said.

“However, Eleni may have a point, as she’s referring to the parabens in her shampoo, which are preservatives, used to increase the shelf life of products by preventing excess bacteria.

“There is some controversy around how the parabens get there, and the European Commission on Endocrine Disruption has listed parabens as Category 1 priority substances, based on evidence that they interfere with hormone function.”

He went on to explain that “most people have parabens in their urine” explaining that like BPA found in plastic, parabens are so chemically close to oestrogen, our bodies can mistake it for the female hormone.

“As a result, it can interfere with oestrogen, which can cause weight gain,” he said. “But to date, weight gain from cosmetics isn’t scientifically proven.”

Mrs MacDougall believes shampoo “is the least of our worries when it comes to weight loss and weight gain”.

“There are so many hidden sugars in the supposed ‘heath foods’ we are consuming,” she said. “Sugar is now the biggest problem we are facing today with obesity rates at an highest and sadly over 1 million Australian children are obese and the government and all leading bodies agree this is due to the high amount of sugar in processed foods.

The backlash on Ms Chechopoulos’ remarks has been so great, she’s recently made her Instagram account private. But before she did, she responded to the heat.

“As usual when I speak about certain topics lots of hate floods in and demand for citations and studies,” she said. “I don’t disagree with wanting studies, but it is not my job to serve everything on a silver platter.

“I suspect many don’t want studies – they want to bully and stir the pot.”

Ms Chechopoulos for comment however is standing by her claims, telling news.com.au her mission is “to help women live healthier lives”.

“I believe that health starts with the quality of the foods we put in our mouths and the products we use on our bodies,” she said.

“The problem we all face today is knowing which products are good for us and which are bad. I believe there are too many potentially harmful ingredients in daily products today.”

She went on to explain she noticed many women use beauty products which she said are full of “potentially harmful ingredients” that many are unaware about.

“It’s my intention to encourage women to use products, shampoo or not, with fewer potentially harmful ingredients.

“At the end of my post, I provided a few of the many studies that show a correlation between these ingredients (BPA, phthalates, etc…) and their effects on our bodies. While I’m not aware of any currently published long-term studies, that doesn’t make this topic a myth.”

Good thing I was interrupted at National Gallery of Modern Art: Amol Palekar
2019-11-25