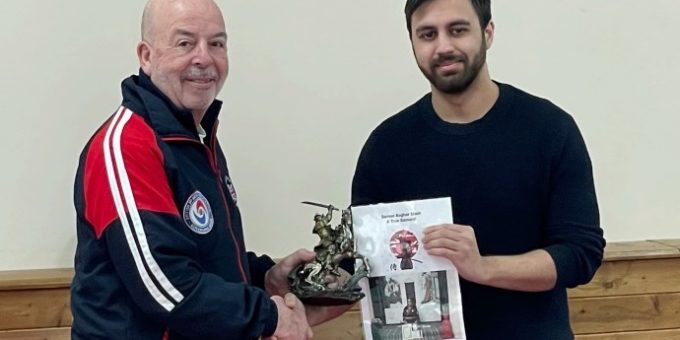 An inspirational martial arts expert and his wife who passed away within days of one another have been honoured with a posthumous award.

Sensei Asghar Ali Shah, 55 and his wife Elizabeth, 51 dedicated their lives to running a Masters of Martial Arts Club but sadly died of Covid in September. The much-loved couple were known throughout Blackburn for their dedication to local sport.

They had helped hundreds of young children to take their first tentative steps into martial arts.

Their son Ali was recently invited to receive ‘The Samurai Award’ from the British Ju Jitsu Association.

Sensei Asghar began training for Ju-Jitsu in 1992 and 23 years later achieved a new ranking which put him amongst a select few in the UK.

In 2015 Asghar achieved a long-standing ambition of a Masters status and obtained a 5th Dan Black Belt in Go-shin Kempo Ju-Jitsu. This despite him being diagnosed with Parkinson’s Disease.

Sensei Asghar Ali Shah and his wife Elizabeth pictured at their club in Audley Blackburn.

But he didn’t let the disease affect his determination and commitment to training the next generation of Ju-Jitsu enthusiasts.

Wife Elizabeth, known to many as Liz, was also a great supporter of the British Ju Jitsu Association and helped at all the club gradings. She had herself suffered a heart attack and was blind in one eye before an accident left her completely blind.

The couple remained dedicated to ensuring their club achieved better than average performances in regional and national tournaments. In recent years the club had exceeded expectations with members outshining more established teams in tournaments.

Their club catered for students aged from aged six upwards and met twice a week at Audley Junior School.

In 2016 the couple were honoured with the Mumtaz Ellahi Fusion Community Sports Award. Pictured with Liz are sons Imran and Ali.

Professor Martin Dixon, of the British Ju Jitsu Association first met Asghar back in the eighties and later helped to grade sons Ali and Imran who went on to become black belts themselves.

Imran and Ali said: “We are really very proud to accept this award.

“Our parents were a real inspiration to the community and helped a lot of young people to reach their full potential.

“They were dedicated to local sport in so many ways and would go out of their way to assist everyone. We would like to thank everyone for their kind words during which has been a difficult time.”

Martin Dixon said: “I miss them both. Our families used to visit each others houses every Christmas and had many meals together.

“Asghar was a true warrior and a lifelong friend and being a personal student I developed a deep personal relationship and understanding with him especially his wicked sense of humour.