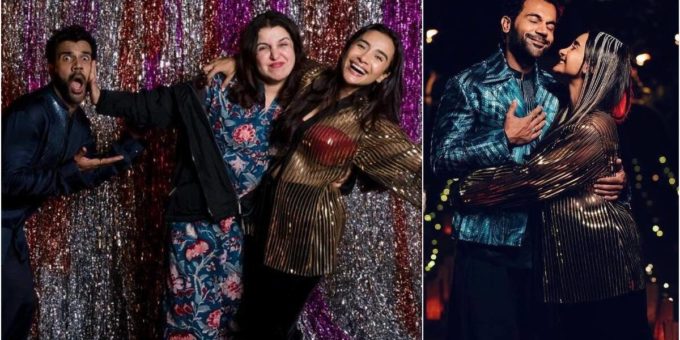 The wedding festivities of Rajkummar Rao and Patralekhaa Paul haven’t yet concluded. The actor-couple tied the knot on November 15 in Chandigarh, with close family and friends by their side. After their dreamy wedding portraits, pictures from their chilled-out pyjama and pool parties have emerged online.

Farah Khan, who was one of the guest at the wedding, shared a photo from their fun night out. Dressed in her flowery pyjamas and flip flops, the choreographer-filmmaker posed with Patralekhaa and Rajkummar. Farah also revealed that she still has a hangover from the party.

“Only wedding where I could wear my nighty n rubber chappals  #pyjama party.. #rajpatra #bestwedding @rajkummar_rao @patralekhaa i still have a hangover ,” she captioned her post.

While Rajkummar looked cool in his shimmery blue night suit, Patralekhaa opted for a gold and black sheer top with a red brallette. They completed the look with sneakers. Patralekhaa’s sister Parnalekha also took to Instagram to share a goofy picture with the couple. The picture has Rajkummar, Patralekhaa and her brother Agnish posing in front of a shiny backdrop.

Farah also shared two photos on Instagram Stories, giving a sneak peek inside their pool party. Using the song “Sunny Sunny” in the background, she shared a photo with Rajkummar, in which she is kissing him. The filmmaker wrote, “Any chance,” while adding a wink emoji. Farah Khan also shared another photo that showed her hugging Patralekhaa. She wrote, “Phool khile hai gulshan gulshan.”

Farah Khan shared this cute photo with Rajkummar on her Instagram story.

Rajkummar and Patralekhaa, who dated for 11 years, got married in a traditional ceremony with only their family members and close friends in attendance. They opted for a destination wedding at Chandigarh’s The Oberoi Sukhvilas Spa Resort.

Illegal sale of Covid vaccines: DGHS to probe if any employee involved
2021-08-22