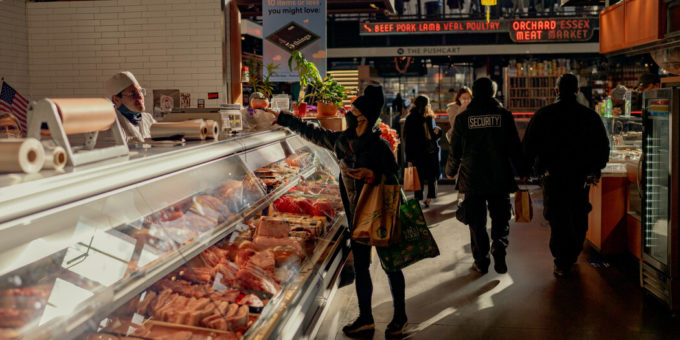 Union efforts that began late last year at three Starbucks locations in Buffalo have spread across the country, and now they have landed in New York.

Employees at three Starbucks stores in Manhattan and Brooklyn, including the company’s marquee roastery in the meatpacking district, and a store on Long Island filed petitions by Thursday morning with the National Labor Relations Board to organize with Workers United, an affiliate of the Service Employees International Union.

The employees are asking to hold a vote on March 3.

These locations join more than 60 Starbucks stores that have sought to unionize over the last several months. Unions at two stores in Buffalo have been established. There are 9,000 corporate-owned Starbucks locations in the country.

In letters addressed to Kevin Johnson, the company’s president and chief executive, employees at the four New York-area stores described years of deteriorating trust between the corporation and its employees, who are referred to as partners. They detailed struggles to make a living and concerns about work conditions during the pandemic, and they expressed the belief that a union would give them the opportunity to shape their workplace into a better one.

“We realize, like our fellow partners across the nation, a union is the way to build back that trust and create a true partnership,” a letter signed by six employees at a store in Brooklyn said. “We want transparency and accountability, and unionizing gives us the power to make sure our presence is felt.”

In the past, Starbucks has maintained that it is not anti-union but “pro-partner,” and that it has been responsive to concerns brought by its workers.

This week, Starbucks fired seven employees who were trying to form a union at a store in Memphis, saying they had violated company policies. And in 2019, the company fired two employees seeking to unionize a Philadelphia location.

Mark Mao, a roasting operator at the meatpacking district location, said the past several years had felt like a “litany of broken promises” about wages, staffing and safety.

The entire 10-member manufacturing team at the roastery, who handle the beans used on site, has signed union cards to qualify for a formal vote, Mr. Mao said. He added that they were not deterred by the recent events in Memphis.

“That just makes me feel that this is the right way to do it, the right way forward,” Mr. Mao said. “Having a union represent our interests, having us collectively bargain for better working conditions and wages, is more important since this happened.”

Dozens of lawmakers in New York, including City Council members and U.S. representatives, are supporting the union efforts generally and wrote a letter dated Thursday to Mr. Johnson urging Starbucks to respect the right to organize.

“New York City is a union town and union-busting has no place here,” reads the letter, signed by 75 elected officials, including Representative Alexandria Ocasio-Cortez and Tiffany Cabán, a City Council member. “We believe that these organizing efforts will ultimately lead to a stronger and more sustainable future for Starbucks, the workers, and our city and state.”

Iran could have enough material for nuclear bomb within weeks, US senators warned