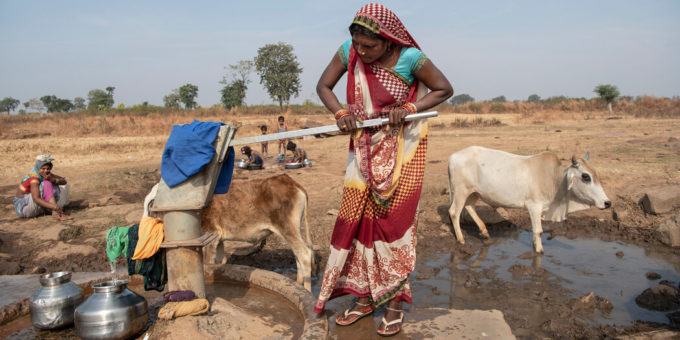 IMLIDOL, India — The pipes are laid, the taps installed and the village tank is under construction — all promising signs that, come spring, Girja Ahriwar will get water at her doorstep and finally shed a lifelong burden.

“I go out and put the jerrycans in the queue at around 5 a.m. and wait there with the children,” Ms. Ahriwar, a mother of three who lives in the central Indian state of Madhya Pradesh, said about her routine of fetching from the village hand pump. “Sometimes it could take five or six hours. I have to stay there because if I leave, someone else moves ahead.”

India, one of the world’s most water-stressed countries, is halfway through an ambitious drive to provide clean tap water by 2024 to all the roughly 192 million households across its 600,000 villages. About 18,000 government engineers are overseeing the $50 billion undertaking, which includes hundreds of thousands of contractors and laborers who are laying more than 2.5 million miles of pipe.

The project has a powerful champion in Prime Minister Narendra Modi, who has slashed through India’s notorious red tape and pushed aside thorny political divisions to see it through. His success thus far helps explain his dominance over the country’s political landscape.

Mr. Modi has remained popular despite a weak economy and a bungled initial response to the coronavirus that left hundreds of thousands dead. He has increasingly relied on communal politics, continuing to consolidate a Hindu nationalist base he has worked for decades to rally.

But the mission to deliver water to every household combines two of Mr. Modi’s political strengths: his grasp of the day-to-day problems of hundreds of millions of India’s poor and his penchant for ambitious solutions. Mr. Modi, who grew up in a poor village, has spoken emotionally about his own mother’s hardship in fetching water.

About one-sixth of India’s households had a clean water tap when the program, called Jal Jeevan Mission, began in 2019. Now, almost half have one.

“You rarely have this drive from the government, the head of state, and it is well funded. Behind the concept, there is budget,” said Nicolas Osbert, who leads the UNICEF water and sanitation unit in India. “All social sectors were impacted by Covid. Not this one. This one was preserved.”

The country’s water problem speaks to the mismatch between its global economic ambitions and the dire conditions of much of its 1.4 billion population, two-thirds of whom still live in rural areas. Nearly 40 million Indians are affected by waterborne diseases every year, leading to about $600 million annually in medical costs and labor loss. About 100,000 children under 5 years old die of diarrhea every year. The growth of millions more is stunted.

“The paucity of water should not become a limiting factor in our quest for socioeconomic development, the quest for high economic growth,” said Bharat Lal, the top official Mr. Modi has named to lead the mission.

From his office in New Delhi, Mr. Lal checks the progress on a detailed computerized dashboard. About 100,000 connections are added every day, according to official figures, and Mr. Lal’s phone pings constantly with videos and photos showing successes.

The mission judges progress by the satisfaction of village councils to avoid slowdowns from India’s layered bureaucracy. Districts and states are teamed up with technical universities for comment on best practices. Local organizations handhold village councils as they take on the role of public utility managers.

The village bodies are expected to collect a small monthly fee — about $1 per household — to have funds for maintenance and to encourage a culture of participation and ownership.

In areas where groundwater is overexploited, the program pipes and pumps treated water over tens of miles from sources like dams. Villagers are trained to test the quality of water and upload the data to the dashboard. They are also taught how to recycle and reuse waste water. Pilot projects are underway to install automated pressure and quality sensors.

The project has its critics. Rajendra Singh, an environmentalist, said that it had not factored in water conservation enough, with India’s groundwater sources plummeting fast. The country draws more groundwater than China and the United States combined, as drought-plagued farmers pump and pump.

“Your sources are drying up,” Mr. Singh said. “In a country where 72 percent of water aquifers are overdrawn, in that country how can you provide water through pipelines?”

In visits to five villages in Madhya Pradesh, one of India’s most water-stressed states, the size of the challenge was clear — in the sinking levels of groundwater, in the shortage of proper electricity to pump and in the refusal of even well-off villagers to pay the small monthly fee.

In some villages, progress was far behind what Mr. Lal’s dashboard showed. There was also skepticism because older projects from years past had failed — the pipes were there, but just why the water was not arriving was a matter of finger pointing.

In others, work was proceeding, with obstacles.

The government has earmarked additional billions of dollars for maintenance but hopes to build a long-term culture of ownership through the local fee. That process has been slow.

In the village of Sihora, all households had water, but only half were paying. Members of the village council cited a political culture of freebies and subsidies.

“If ration is free, house is free, child delivery is free, wedding is free,” said Jyoti Abadiya, a council member, “they say the water should also be free.”

In Panari, a prosperous village that has a sugar mill and grows three crops, weak electricity meant households get only a couple of hours of running water daily. The women, who traditionally fetch household water, said they now saved time retrieving water but still filled buckets at home to stock up.

“The line cuts every few days,” said Hemant Kumar Sharma, the pump operator. “Then I have to look for the electricity man for two hours.”

Only about one-fifth of households were paying. “The poor people are paying,” said Naryan Prasad Faujdar, the lanky and bespectacled village plumber. “The rich are not.”

Rajendar Kaurav, his jaw full with chewing tobacco, responded that he could easily pay but he disagreed in principle: Water is the government’s responsibility. “If I pay, others don’t pay,” he said.

Another villager countered, If you don’t pay, the water will be cut — and the hospital bill from drinking from the canal would be much higher.

Mr. Jain, a mild-mannered engineer with three decades of service, had a front-row seat to the water crisis. Vulnerability has shot up with sinking groundwater levels. The old solutions of installing hand pumps and digging tube wells were not good enough.

He is in charge of bringing water connections to about 300,000 households across 3,000 villages in Madhya Pradesh. In the areas where the groundwater is overexploited, such as Ms. Ahriwar’s village of Imlidol, his team draws from a dam about 50 miles away. The work there is three-quarters complete, Mr. Jain said.

Water scarcity in Imlidol means people grow only one crop a year. Most of the men seek labor elsewhere. Ms. Ahriwar’s husband, Rakesh Ahriwar, a mason, said he was going to Delhi soon to look for work, leaving his wife and their three children.

Once the water arrives, Ms. Ahriwar said, “I will be saved of the trouble and the distance.”

For Mr. Jain, 58, the completion of the mission will closely coincide with his retirement. From a modest beginning delivering hand pumps and tube wells, he could leave a legacy of tap water for 300,000 homes, a prospect that left him emotional.

“I will be the happiest man,” he said.

Myanmar: At least one dead, 70 missing in jade mine landslide

Khloe Kardashian: Only a FAKE Feminist Would Say My Face Looks Like a Friggen’ Alien!
2021-06-08