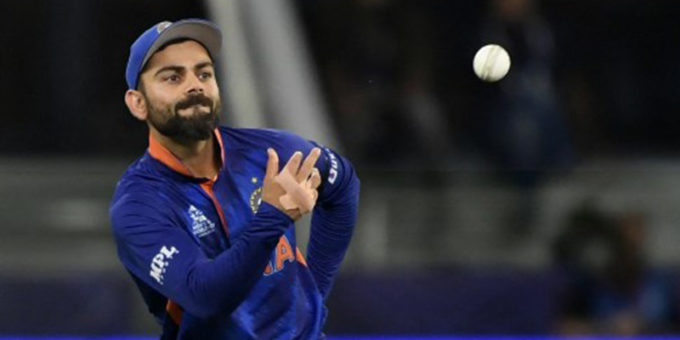 Virat Kohli said Wednesday he was told only 90 minutes before the official announcement that he had been sacked as India’s one-day captain.

Kohli quit as T20 skipper after the recent World Cup and
last week lost the ODI job too, with India’s cricket board saying it wanted
Rohit Sharma to lead in both white-ball formats.

The surprise announcement came in one line at the bottom of
a press release by the Board of Control for Cricket in India (BCCI) about the
Test squad for the upcoming tour of South Africa.

“I was contacted one and a half hours before the
selection meeting on the 8th for the Test series and there was no prior
communication to me at all,” Kohli told reporters Wednesday ahead of the
team’s departure for South Africa, where they will play three Tests and three
ODIs.

“Before ending the call I was told that the five
selectors had decided that I would not be the ODI captain, to which I replied,
‘ok fine’,” the 33-year-old said.

Kohli will still captain India in the Tests in South Africa
but press reports suggested that he had decided to skip the subsequent ODI
series in a huff.

But Kohli denied this, telling reporters Wednesday that he
“was and am available for selection” and hit out at sections of the
media for “writing lies”.

“Nothing can derail me from being motivated to play for
India,” he said. “I am very focused and mentally prepared and very
excited to go to South Africa and do the best that I can for my team.”

Kohli said he would support “100 percent” Rohit
and new manager Rahul Dravid, calling him a “very balanced coach” and
a “great man-manager”.

“Rohit is a very able captain and very, very tactically
sound. We have seen that in the games that he captained for India and in the
IPL as well,” Kohli said.

India have never won a Test series in South Africa, but
Kohli said the visitors were motivated by the fact that the last Test they
played there, in Johannesburg in 2018, they won.

“We probably won in the toughest conditions in that
tour, so that should give us a lot of confidence that if we have the right
mindset and we start out the series with a lot of confidence, we can definitely
stand up to any challenge that comes our way,” Kohli said.

“South Africa is one place where we have not won a
series yet. We are very motivated to do that and the mindset is always (to) go
out there and win a series in any country that we play. We don’t anymore just
think of winning a Test match in India,” he added.

This year India beat Australia 2-1 Down Under — albeit in
Kohli’s absence apart from the first Test — and were 2-1 up in England before
the tour was called off because of the pandemic.

Last week in India, they thrashed New Zealand by 372 runs to
win the series 1-0, avenging their loss to the Black Caps in the inaugural
World Test Championship final in England in June.

“South Africa presents a different kind of challenge.
The wickets present a lot of pace and bounce and you need to be at your
absolute best to be able to perform there and get runs,” Kohli said.

“I think we are very well placed in terms of experience
and belief and confidence that this time around we can do something special and
get the results that we want as a team.”