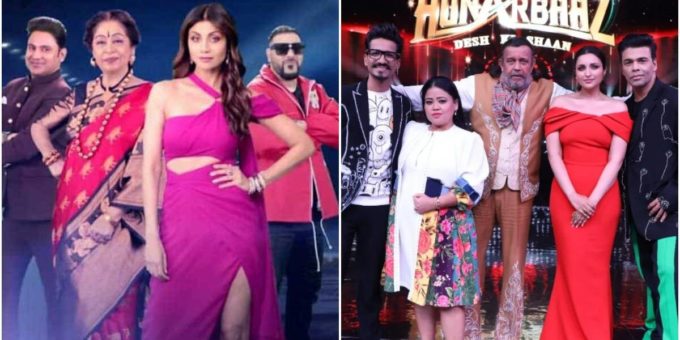 India may be home to many reality shows, however, there’s no variety in formats. Aspiring talents are mostly competing in singing or dancing shows. And then in 2009, taking a cue from the original Britain’s Got Talent, Colors launched India’s Got Talent. For the first time, all kinds of talent were on the same stage, with the criteria to entertain and impress. Having aired eight successful seasons on the channel, this year the show shifted base to Sony TV. So what did Colors do next? It launched its own talent-based show — Hunarbaaz with the same format but different judges.

Both shows launched in quick succession and airs back-to-back on television. India’s Got Talent is at 8 pm on Sony TV while Hunarbaaz takes the 9 pm slot on Colors. Having watched the first episode of both the shows, here is our assessment.

India’s Got Talent has the upper hand as they have the ‘OG’ judge Kirron Kher. Her sweet yet strict personality adds the much-needed drama to the show. While she encourages contestants, addressing them as ‘beta’, she won’t hesitate to call them ‘crazy’ (When one contestant attempted to use the drilling machine on his face). On the other hand, Shilpa Shetty and Badshah seem like kids at a candy shop. However, Manoj Muntashir, the least popular judge on the panel, looks like a complete misfit. Neither does he have the charm to connect with contestants nor add any value in terms of judging talent. Wish the makers had stuck to just three judges.

Coming to Hunarbaaz, as the hosts introduced the ‘ameer judges’, Karan Johar enters flaunting his international brands. While we were excited to see Parineeti Chopra as a judge, it was a total turn-off when she mentioned how she was on the show to find a groom. As already seen in the promo, the whole season will focus on K Jo trying to play matchmaker. Why do we still need this buffer humour in a talent show? Lastly, there’s Mithun Chakraborty with his own swag and new takia kalam ‘kya hunar, kya hunar, kya hunar’.

Verdict: As far as judges are concerned, our vote goes to India’s Got Talent, only because of Kirron Kher.

While Bharti Singh and Haarsh Limbachiyaa have our heart and smiles, do gear up to see their pregnancy getting the spotlight this season. Makers have already set the stage for the first ‘pregnant anchors’ on Indian television and most content will revolve around the same. On the other hand, Arjun Bijlani, being his usual ‘host’ self, is sweet, humane and relatable. However, the first episode didn’t have much of Arjun but we can’t wait to see his banter with Kirron Kher.

Verdict: Arjun Bijlani is quite an amazing host but no one can beat Bharti-Haarsh’s candidness.

India’s Got Talent in its first episode showcased more variety in terms of performances as compared to Hunarbaaz. Also, they had more spectacular acts. While Sony TV hosted popular band Euphony, the Colors’ reality show roped in Sa Re Ga Ma Pa Li’l Champs winner Hemant Brijwasi and his brothers as a band.

Verdict: Overall both shows had a good mix of contestants and we can’t wait to see what lies ahead.

We all know reality shows today are mostly about tear-jerking moments than real talent. Both shows had contestants sharing their emotional stories. In India’s Got Talent, a dancer spoke about how her husband and in-laws have chosen to abandon her if she doesn’t leave dancing. However, there were no breakdowns on the other side of the table as the judges, especially Kirron Kher, tried to talk sense into her. As for Hunarbaaz, Parineeti Chopra’s emotional side was showcased multiple times as she got all teary-eyed about the struggles of the contestants.

Verdict: Given there was so much tears in the first episode, both shows get a dismissal rating.

India’s Got Talent did not include any antics for laughs and focused primarily on the acts. The creative team focused on the chemistry between the judges and that’s quite a treat to watch. Be it Kirron Kher calling Shilpa and Badshah ‘badly behaved’ judges to seeing their over-enthusiasm to her funny comments, it is all worth your time. Sample this: After a girl showcased a ‘hair ariel’ act, Kirron said that if she continues to do this, she will soon become like Anupam Kher.

To add more laughter and drama, Hunarbaaz hosted a few ‘funny contestants’ too on the show. Be it a woman seeking a role in Karan Johar’s film to a ‘thookbaaz’ whose talent was in spitting. However, not all the tricks hit the bull’s eye. However, the overall energy on the show is quite high, making it a delightful watch.

Verdict: Not to any show, our vote goes to just Kirron Kher.

Overall, both shows have their own strengths. With their different timeslots, the shows will find their own fan following. While India’s Got Talent has the upper hand of familiarity and loyal audience, Hunarbaaz brings freshness in terms of energy. Do let us know which one is your pick.