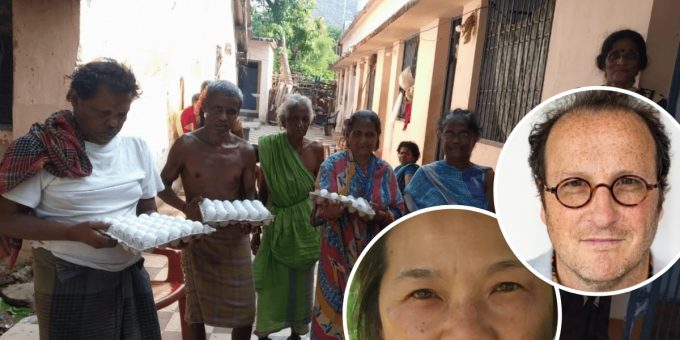 A GROUP of friends from Sussex are providing aid for a leper colony in India as the country is ravaged by a new wave of Covid.

Liza Tong, Diets Verschuren, Mimi Khan, John Halpern and his wife Taline are raising funds to source food and medicine for the colony.

It comes as hospitals and crematoriums in India are overwhelmed, with some people forced to turn to the black market to buy oxygen canisters.

The friends, from Brighton, Peacehaven and Newhaven, are trying to raise £350 every month to keep people in the colony alive as the price of food rockets.

Leprosy can cause horrific injuries

John, 53, said: “Everything we send goes straight to them – every penny – and we see the joy in their faces as food arrives.

“They cry with relief and tell us they are grateful that someone cares about them, when all their lives they have been rejected and unloved.

“Their families have abandoned them. We have become their mums and dads, their brothers and sisters. To be honest, they would die without us.”

A deadly wave of the virus has ripped through India in recent weeks, leaving people struggling to buy personal protective equipment (PPE) and medicine.

The situation has been especially difficult for the most vulnerable groups, including those with leprosy, who live with permanent pain and are often abandoned by their families.

The friends are trying to help the colony through their charity, A Leg To Stand, A Hand to Feed, and have received donations from across Sussex – as well as putting in their own money.

Their man on the ground is David Lima, he lives with the colony, helping with their medical needs and arranging for them to receive supplies.

The 51-year-old said: “The benefit is mutual, we speak with the group over Skype regularly, getting their direct feedback and seeing the evidence of what happens to the funds we send them and the difference it makes.

“Their smiles are beautiful. It gives us all a sense that we are doing something positive.”

Liza, Diets and Mimi met while working at the international HIV/AIDS Alliance, a Brighton-based charity.

The also worked with Taline and met her husband John, a crossword creator.

The group have a long standing relationship with the leprosy colony in Paralakhemundi, in the Indian state of Odisha, to the east of the country.

When their friend and fellow charity colleague Steve Lovell died of cancer earlier this year, the colony put up a picture of Steve and pray for his family every day.

The leper colony in Paralakhemundi

If there is money left over, the group put on events for people in the colony and even managed to arrange for them to go on a trip to the seaside.

For many, it was the first time they had ever seen the sea.

You can donate to the charity here: https://www.alegtostand.com/donate

Celebrities Spotted On The Set Of Eid Show 2021

Pak Army to live up to nation’s expectations whatever the odds: COAS Bajwa
2020-10-22

What All You Can Make In Air Fryer? Here Are Some Ideas That Might Surprise You
2020-07-13