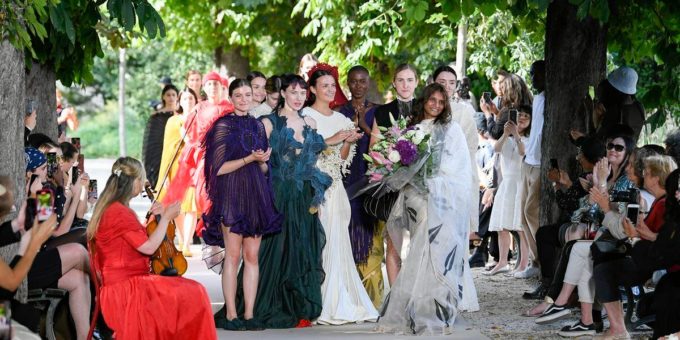 Founder of the eponymous label Vaishali S, designer Vaishali Shadangule debuted at Paris Haute Couture Week 2021 with her collection ‘Shwas’, meaning ‘Breath’. She was the first woman designer and one of the two international guest designers who have been invited by the Federation de la Haute Couture et de la Mode to showcase their brand’s couture collection at the event.

The event was held live at Lycee Victor Duruy, a prestigious High School and an iconic Parisian landmark on the left bank in Paris.

Speaking about showcasing her collection at PHCW, Vaishali said in a statement, “I am elated to have been selected by such a prestigious platform to showcase my passion for textiles and my commitment to sustainability.”

The collection takes inspiration from nature and its flow of energy. (Source: PR handout)

Vaishali’s couture collection presented 20 garments, featuring craftsmanship from across India, including Merino wool woven in Maheshwar, Khun from Karnataka and other indigenous weaves from West Bengal. The collection takes inspiration from nature and its flow of energy. The designs are inspired by the lines and curves in corals, tree bark and other natural textures.

“As an Indian woman showcasing at the pinnacle of global couture, this is a significant milestone. India has a strong design language in terms of craftsmanship combined with social impact, the richness of technique beyond embroidery or plain manufacturing. The idea was to put the Indian weave on the highest platform, in its purest form,” the designer added.

The designs are inspired by the lines and curves in corals, tree bark and other natural textures. (Source: PR handout)

Known widely as ‘wearable art’, the collection largely consists of darker hues suited to the Autumn-Winter season. It blends traditional weaves and techniques with dramatic silhouettes, and includes some of the designer’s signature techniques such as cording, engineered deconstruction and texturing.

The 43-year old designer started the label Vaishali S in the year 2001, owing to her love for classic Indian weaves and textiles. Vaishali has previously showcased her designs at New York Fashion Week.

Rachel Lindsay on Rachael Kirkconnell: This Loser Ruined The Bachelor!
2021-02-24