Indian cuisine boasts of some of the most delicious dishes ranging from fiery and bold ones to tangy and tantalising ones. If you’ve grown up in an Indian household, you’ll be accustomed to a staple Indian meal consisting of a gravy dish and a dry one along with a bowl of rice and roti at all times. A typical meal would have at least one curry to go with rice, be it the comforting dal, rajma or a bowl of flavourful kadhi.

Kadhi or kadhi pakoda is a curd-based curry that has different variations in different parts of the country. From a Maharashtrian kadhi to a typical Punjabi one, the flavour and the recipe differs in different states. While kadhi can be relished with chapatti too, it complements rice like nothing else! A usual dish of kadhi has fried balls of gram flour, which when doused in the curry, softens and simply melts in the mouth when eaten. Even though the traditional style of making kadhi is the most popular across India, there are slight variations in each household with many other irresistibly delicious and interesting recipes.

Here we have five of the best kadhi recipes that can provide a great twist to your usual kadhi.

Yes, you read that right! Singhara or water chestnut is a fruit that grows underwater and enjoys little preference in Indian cooking. But, come the fasting season and this would be a hit in Indian households. Here is a kadhi recipe made with water chestnut flour mixed with curd and spices, making it a healthier alternative to the gram flour one, since it is low in calories, fat and sodium; but is energy dense and most importantly gluten-free. Surprise your family with this super delicious, tangy and interesting kadhi recipe for a change!

Popular Chef Saransh Goila’s comfort food, this Sindhi kadhi from his kitchen is a perfect balance of healthy and tasty! Packed with the goodness of veggies such as lotus stems, drum sticks, okra and colocasia cooked in an array of spices, this Sindhi kadhi is simply unmissable!

Another gluten-free kadhi recipe that you can try at home, Garhwali kadhi is made with Jhangora millet, which is highly nutritious. It is soaked and made into a ground paste, which is mixed with curd and cooked with spices such as turmeric, chilli powder and asafoetida. Pair with a piping hot bowl of rice for a stellar meal. 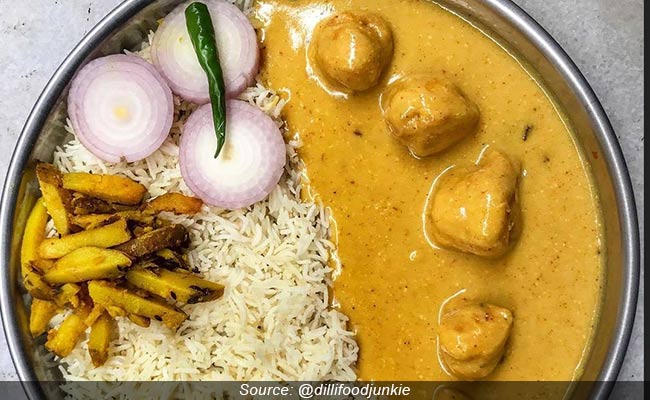 Make your kadhi all the more tantalising with this quick and easy tomato kadhi recipe! Mixed vegetables simmered in some tangy, boiled tomato water along with tomato puree and a host of spices adds to the spiciness of the dish.

Slurping already by its name itself? Aamras ki kadhi is here to up the tangy game of your usual kadhi! Raw mango puree, loads of buttermilk, gram flour and loads of spices make this flavourful decadent simply irresistible. We bet you won’t have enough of this once you try at home.

Give your usual kadhi a twist with these kadhi recipes at home. Let us know your experience in the comments section below.

About Aanchal MathurAanchal doesn’t share food. A cake in her vicinity is sure to disappear in a record time of 10 seconds. Besides loading up on sugar, she loves bingeing on FRIENDS with a plate of momos. Most likely to find her soulmate on a food app.

Love Horoscope: Who would get lucky in love this February, as per the zodiac signs