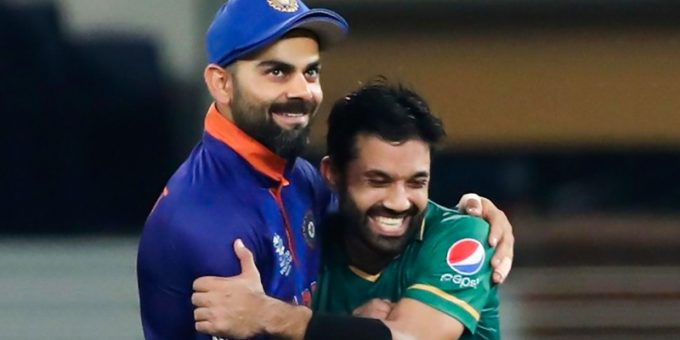 Pakistan and India meeting each other in the T20 World Cup final will help improve the relations between the two countries, Pakistan head coach Saqlain Mushtaq has said.

“It is our neighbouring country, if we play two matches against them then our relations will improve,” said Saqlain while addressing a press conference on Thursday.

Saqlain believed the post-match pictures that went viral after the Super 12 fixture between the sent a strong message to the whole world.

The photographers captured moments when Indian captain Virat Kohli was embracing Pakistan batsmen Mohammad Rizwan to congratulate him for the win.

“The way Virat Kohli and MS Dhoni interacted with our players and how people commented, it was the best thing about that match,” said Saqlain.

“The message that went out was that we are humans and we have love between us and we don’t care about other things.

“Hats off to Babar, Rizwan, Dahani, Malik, Hafeez, Virat and Dhoni, they gave a strong message through that picture for the world and the two countries.”

Pakistan beat India in their opening fixture by 10 wickets. Kohli said his team was “outplayed” in the contest.

Saqlain said if Pakistan meet India in the final and beat them, it would prove the former as genuine World Cup winners.

“If we face India in the final then it will be great, not because we have beaten them or we’ve become big headed, but because if you really want to become a world champion you should be thoroughly checked and it should be proven to the world that you are really world champions,” said the former off-spinner.

The match-up would also benefit world cricket as a whole, Saqlain believed. “If India come in the final against us, then the ICC, the fans and the cricketing world will have some fun.”

Can this pandemic be the crisis that finally forces us to fix long-term care?
2020-04-25