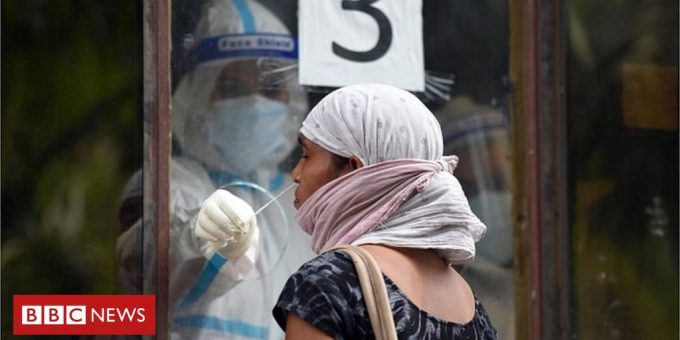 Nearly one in four residents in India’s capital, Delhi, has been exposed to coronavirus infection, antibody tests on a random sample of people suggest.

The government survey said 23.48% of the 21,387 people whose blood samples were tested had Covid-19 antibodies.

It suggests that infections in the city are much more widespread than the number of confirmed cases indicates.

At 23.44%, the number of infections would be 4.65 million in a city that size. A government press release says the difference shows that “a large number of infected persons remain asymptomatic”.

It even says the figure of 23.48% may be too low because Delhi has several pockets of dense population. But it adds that “a significant proportion of the population is still vulnerable” and all safety measures must be strictly followed.

Experts say the study, the first of its kind in India, is crucial because it will help authorities understand the spread of the virus better.

It will guide them towards better distribution of testing facilities and also help in coming up with area-specific containment policies.

Delhi has been one of the worst-hit cities in India and saw a chronic shortage of hospital beds in the first two weeks of June.

But hospital infrastructure has been improved since then and the number of daily cases has also fallen.

The capital has recorded 1,200 to 1,600 new cases a day in the past two weeks – about half of its daily count in the last week of June.

And on Monday, the city recorded only 954 cases.

The sharp fall in the number of cases can be attributed to increased testing, tracing, containment and isolation.

The city has also registered a fall in the number of fatalities.

No More Lockdown In Bengaluru, BS Yediyurappa Appeals For Cooperation