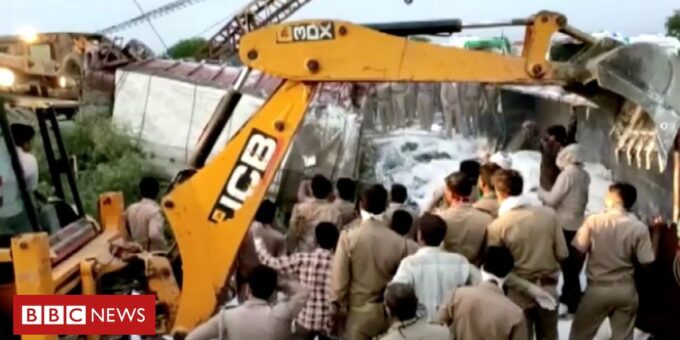 At least 24 migrant workers trying to return home during a nationwide lockdown have been killed in a crash between two lorries in northern India.

The accident happened in the Auraiya district of Uttar Pradesh state early on Saturday, when one of the lorries hit another parked at a roadside cafe.

Most of the workers were reportedly from the western states of Jharkhand and West Bengal.

The government imposed a lockdown on 24 March to contain the new coronavirus.

The move has caused economic disruption across the country and left millions of migrant workers who rely on daily wages to survive stranded with no money.

Many desperate to return to their home states from big cities have been walking hundreds of kilometres or hitching rides on goods lorries, rather than waiting for spaces on the special bus and train services organised by the government.

Dozens have been killed in road and rail accidents.

Earlier this week, six died when they were run over by a bus on a highway in the Muzafarnagar district of Uttar Pradesh.

And on 8 May, a freight train killed 16 who had stopped to rest along some railway tracks near the town of Aurangabad in Maharashtra state.

Prime Minister Narendra Modi expressed his condolences to the families of those killed on Saturday, and wished the 36 others who were injured a speedy recovery.

“The accident in Auraiya… is very tragic,” he wrote on Twitter. “The government is carrying out relief work in full swing.”

Uttar Pradesh Chief Minister Yogi Adityanath ordered officials to ensure the injured were provided with medical care and to ascertain the cause of the accident.

The leader of the regional Samajwadi Party, Akhilesh Yadav, accused the government of negligence in its handling of the situation for migrant workers.

“Such accidents are not deaths, but murders,” he tweeted.

Barber Defied Rules and Cut Hair From Home. Now He Has the Virus.

Dia Mirza’s style is all about elegance coupled with minimalism; see pics
2019-07-17