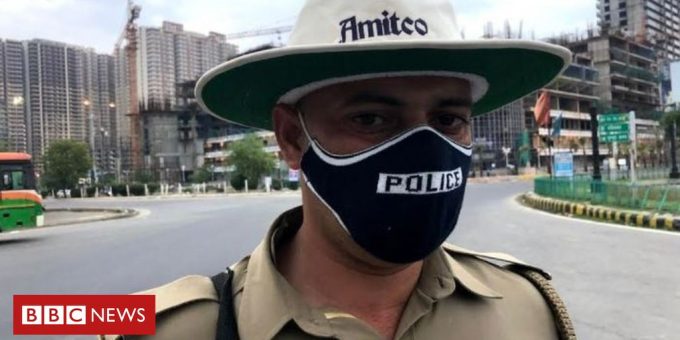 Inspector Munish Pratap Singh was about to finish his shift around 22:00 when a helpless father called him with an unusual request.

“Could you please get a birthday cake for my son? It’s his birthday and he is really sad,” the father said.

Insp Singh is not used to dealing with such requests, but these are no ordinary times.

All shops were shut in his area, but he called a baker he knew and – luckily – a cake was available.

“The happiness on the boy’s face made everything worthwhile. My team and I forgot how tired we were,” he says.

Insp Singh is not alone among his colleagues with such a simple act of kindness. Many other officers in India have delivered birthday cakes to children and the elderly, given food to the homeless and provided essential medicines to those in need.

They have also been seen singing popular Bollywood songs on loudspeakers to motivate and entertain people. Videos of such gestures have gone viral on social media and in many places, people have showered flower petals on policemen.

It is all very different from a few months ago, when allegations of excessive force, corruption and human rights abuses dogged India’s police force.

But these heart-warming tales of kindness during the coronavirus pandemic are only half the story: behind them are more hidden stories of determination, duty and sacrifice, making the policemen “frontline warriors” of India’s battle against coronavirus.

They are doing a range of jobs: enforcing the lockdown, contact tracing, manning check-points, providing security at high-risk zones like hospitals, quarantine centres and containment zones, and – importantly – calming people’s fears about coronavirus.

But they were never trained for this, says Vikram Singh, former police chief of India’s most populous state, Uttar Pradesh.

“They were trained for maintaining law and order,” he says, but never for managing a pandemic and understanding medical safety protocols.

“So in that sense, they are doing a great job, often against great challenges,” he adds.

And the main challenge is their exposure to the number of people they meet – specially lower-rank officers who are out in the field.

More than 1,000 policemen have tested positive in Maharashtra state and at least four have died. In Delhi, there are more than 100 cases of infection among policemen, and a 31-year-old constable has died.

He has left behind a wife and a young son, who have also tested positive. Similar reports have come from other Indian states as well.

The fear of infection is real, says Insp Singh, but sometimes the methods used to stop the spread also cause problems.

Take the containment zones, set up in areas where more than one case is reported. Insp Singh has several in his area in Noida – a suburb of Delhi – and it falls to his officers to make sure no one enters or leaves.

“People become jaded because of living in a containment zone and some of them end up arguing with the police – but we have to stay calm.

“My men also fear the infection, but nobody thinks of not doing the job – it’s a fight we can’t turn our backs on,” he adds.

“But I would be lying if I say that we are not scared.”

Many policemen are also staying away from family to ensure they don’t pass on the infection in case they are infected and asymptomatic.

Constables Vikrant Rana and Pankaj Chaudhary, who have not seen their families for more than two months, try to hold back tears while showing the photos of their family members on their mobile phones.

“I know policemen are supposed to be tough, but we are also humans and we also long to meet our families. I pray we win this war soon,” Constable Rana says.

I meet constable Dhruv Tomar at another check-point in Noida. He has not seen his one-year-old twins since February.

“I can’t stop thinking about them, but I won’t meet them anytime soon. We stop hundreds of cars and bikes every day to check, and we have no idea who is carrying the infection,” he says.

“At least medical teams mostly know what they are dealing with. We are mostly dealing with the unknown.”

They wear masks and gloves, but standing for eight hours on the streets in scorching heat wears them out.

That is why they need to be given shorter shifts, says Gopal Hosur, former inspector-general of police in Karnataka state.

He says the psychological impact of the pandemic on policemen can’t be ignored and senior police officers have to ensure the constabulary is being looked after.

“One way of doing this is for senior officers to be out in the field and meet field teams regularly, which gives the message that they are not alone in this fight.”

Neeraj Jadaun, superintendent of police in rural Ghaziabad district, agrees with the suggestion.

“I meet most members of my team every day and listen to their problems. We are in this for the long haul and it’s important that the entire force works as a team,” he adds.

Another unintended consequence of police’s work has been the growing trust between the police and the public.

Allegations of using excessive force, corruption and human rights abuse against the police are not uncommon in India.

India has had one of the strictest lockdowns in the world, and policemen were given sweeping powers to enforce it.

In some cases, they abused these powers and beat up people. There have also been allegations of policemen harassing small shopkeepers and vendors.

But Mr Singh says those are stray incidents. “Overall, people have rally begun to trust and even admire the policemen,” he adds.

So what has changed the equation?

Mr Hosur acknowledges that there has always been a trust deficit between the police and the public.

But the pandemic, he says, has helped the police to show their human side.

“Policemen have become the first point of contact for anybody in distress. They are working long hours and there is an amazing sense of service and solidarity,” he says.

He says no ambiguity in orders from politicians has also helped.

“Policemen often have to tread a fine line because of constant political pressure. But this time, their mission is clear and there is no interference,” he adds.

But will this growing trust last?

He says the pandemic is not getting over anytime soon. “So it will be interesting to see for how long this new idea of community policing lasts,” he says.

Police in India deal with high crime rates in most states, and they have to frequently deal with law and order situations and also provide security to VIPs.

They are also chronically under-staffed. One report says there are 144 police officers for every 100,000 citizens.

So that leaves little scope for community policing. But Mr Punnose says the pandemic has shown that police and public can work together to overcome any challenge.

“You can see in the body language of policemen – most of them are polite these days, and the public is also reciprocating,” he says.

But the possibility of continuity, he says, depends on senior officers.

“They have to learn important lessons from the pandemic and prepare a police force for the future.”

He argues that managing pandemics should now be included as a study subject for senior officers.

“We were caught unaware this time and we have done well so far. But we may not get this luxury the next time, so we need to be prepared.”

And if we don’t do it, he adds, things will go back to how they were.

“And all the handwork and sacrifices will mean nothing. We have earned this trust with great difficulty and we should not let that go easily.”